In just a matter of days, the Beatles' first foray into videogames comes out with the release of The Beatles: Rock Band - the New York Times reports on the great care and time it took to "recreate and re-imagine...not just stepping stones in the career of a band but transformational shifts in the history of popular music."

Meanwhile, Courtney Love has sold Cobain's name, likeness, and songs to Guitar Hero, but apparently the deal didn't come with a guarantee that Guitar Hero honor so much as a whiff of the importance and seriousness with which Cobain regarded his music.

"Not only did Cobain’s widow Courtney Love have to sign off on behalf of the estate, so did former drummer Dave Grohl and Primary Wave Publishing, which administers the Nirvana catalog."

It's doubtful that Cobain, who wrote "Rape Me," would approve of this abomination, which re-imagines him as Britney Spears, singing the hits of Billy Idol, Bon Jovi, Bush, and Flavor Flav-era Public Enemy, hip-hop moves and all.

Equally scary is that Johnny Cash apparently makes an appearance in the game. Whether he's as adept a rapper as Cobain is anyone's guess.

On the way home today, not moments after publishing this post, I ran across this forlorn Kurt Cobain action figure in the window of Red River Book Shop along with his plea to "Stop downloading. Buy my CD."

The man has spoken. 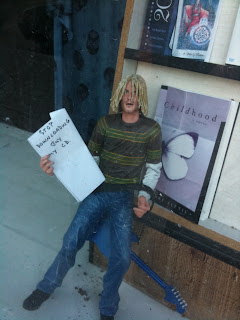 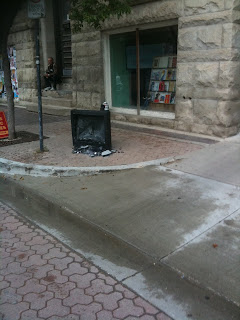 Did mini Kurt Cobain break this TV? If not, he certainly saw who did...
Posted by Kenton Larsen at 6:38 PM