Question of the day: how do you spell "Khaddafy?" 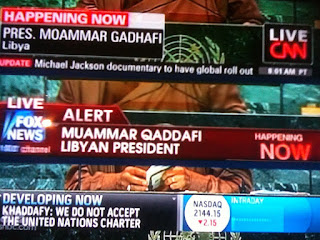 If only we could agree on what to call the Guide of the First of September Great Revolution of the Socialist People’s Libyan Arab Jamahiriya, my life would be complete.

How do you solve a problem like Libyan leader Moammar Khaddafy?

Not the guy, just the spelling of his name.

Among our options:
Cecil Adams of the Straight Dope website explains:

"The basic problem here is that (1) there is no generally accepted authority for romanizing Arabic names, and (2) the Mummer's name contains several sounds that have no exact equivalent in English.

"In standard Arabic, the initial consonant qaf is pronounced like a throaty k, midway between the English k and the German ch, as in Bach. The second consonant, dhal--two dhals, actually--is pronounced like a double dh, which is similar to English th, only with the tongue pulled back a bit behind the teeth.

Apparently you can't ask Khaddafy how to spell it, because he doesn't care one way or another (even his personal website spells it inconsistently).

Maybe that's a good thing: take Kim Jong-il, who once sentenced a journalist to six months' hard labor at a pig farm for forgetting to write the last syllable of his name. Suddenly that 50-per-cent-off-your-mark-for-a-typo rule doesn't seem so harsh, eh?

I was going to e-mail Khaddafy to ask him how to spell his name, but the "contact us" button is only "coming soon." Maybe I'll write Prime Minister Steephine Hurphur instead.
Posted by Kenton Larsen at 8:09 PM