Hate versus just clownin' around: a tale of two covers

The latest cover of New York gives Obama a makeover... 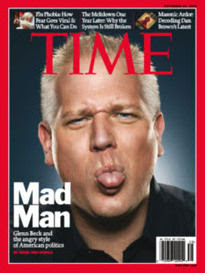 There appears to be a slight blip between viewpoints when you compare the latest covers of Time and New York magazines, perhaps the result of increased media fragmentation and the need to "comfort the afflicted, and afflict the comforted" to attract a niche, but regular stable of readers.

(Remember: part of Newsweek's latest strategy is to attract fewer readers, which I wrote about here.)

Personally, I find it hard to downplay Obama posters featuring Hitler mustaches, swastikas, and whiteface as "just clowning around," but Time prefers to look on the sunny side of life by writing a virtual love letter to conservative commentator Glenn Beck - the guy, you'll recall, who calls Obama a racist.

Time Magazine does call Beck a "pudgy" and "weeping" phenomenon, but only as a lead in to compare him to Oprah and Dr. Phil and to congratulate him on being a "gifted entrepreneur."

"Time" for a change

Regardless of what one might think of the content, the article is a path well trodden for Time magazine. "Is Glenn Beck bad for America?" it asks.
Here, Glenn Beck gives himself credit for predicting the 2001 terrorist attacks in New York City - and preparing his family for when it happens again:

"Gifted entrepreneur" or "the enduring rot in American politics?" Hmmmm....tough call!
Posted by Kenton Larsen at 10:25 AM