Shoot out the TV: I've seen every Elvis movie 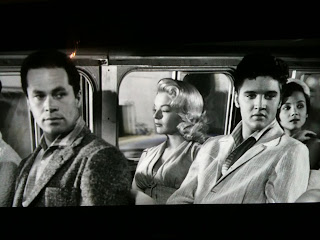 Thank you. Thank you very much - for renting one of my eight, good films.

I can die now.

I just watched Jailhouse Rock. It wasn't so much a Blockbuster night as it was (cue movie-guy voice) "the end of an odyssey of self-discovery 15 years in the making!"

Now, when I walk down Corydon on my way to buy Spider-Man Pez at Sugar Mountain, I can proudly hold my head up high, tip my hat to passersby, and confidently say:

"Out of my way, peasants! For I have seen every Elvis Presley movie ever made!"

It's true that "you're either a Beatles person or an Elvis person," and I've made no secret of my obsession with all things John, Paul, George, and Ringo on this blog. Did I get the names and order right?

So, I'm not a person who will ever likely feel the urge to go to Graceland, put a rock on Elvis' grave, or rent a spangled jumpsuit (though I'm not ruling it out for later in life).

But Elvis' movies are the stuff of which showbiz legends are made, as these examples show:


The good, the bad, and the ugly. Mostly the ugly.

The thing is: most Elvis movies are really, really bad. As you see in my one-line reviews/encapsulations, below, there are really only eight that I think are worth watching.

Some of the most-remembered Elvis flicks are painfully bad: Blue Hawaii, Viva Las Vegas, and Girls! Girls! Girls!, which is really just a good title and precious little else.

When you start your foray into Elvis films, you can fool yourself into thinking that you're being entertained, because it's equally jarring and bizarre to see that famous, dead guy "up there and alive," singing and dancing.

But watch too many Elvis movies in a row, and you very quickly lose your movie-reviewer compass, your very morality, sense of right and wrong, good and evil.

So, I watched these films slowly, one or two a year over the last decade, spanning VHS tapes, DVDs, HD, Blu-ray, and digital downloads, making very sure that I didn't lose touch with the real world, like Elvis did, or lay in bed too long, like Brian Wilson and the Barenaked Ladies did.

After shooting out five or six TV sets with six guns and eating my weight in fried peanut butter and banana sandwiches, I broke down the films of Elvis Presley into three categories: the Good, the Bad, and the Ugly.

Jailhouse Rock (1957) - Con becomes a singer. The famous musical number is worth the price of admission alone, though I've never seen inmates dance like that in real life.

Flaming Star (1960) - Watered-down Western version of the same-old Elvis template and the first sign that Elvis is really bored. Still, it's not an altogether bad morality tale.

The Trouble with Girls (And How to Get Into it) (1969) - Terrible title and film in which Elvis runs a Chautauqua and has less screen time than most of the other actors. That's right: Chautauqua.

Change of Habit (1970) - Mary Tyler Moore herself has to choose between being a nun and doing it with Elvis. Get it? Habit?

GI Blues (1960) - One of the worst; a shameless and lame attempt to cash in on Elvis' fame as America's most celebrated draftee.

Girls! Girls! Girls! (1962) - Our fishing guide is torn between two lovers. Should be called "More girls than plot."

It Happened at the World's Fair (1963) - Elvis hitchhikes to the Seattle World's Fair, where nothing happens.

Kissin' Cousins (1964) - Elvis tries to convince his lookalike relative - played by Elvis! - to convert his farm into a missile site. What?!

Tickle Me (1965) - Yet another ranch, where Elvis runs into yet more wealthy, glamorous babes.

Harum Scarum (1965) - Elvis goes to the Middle East to assassinate an Arab king. Isn't that the plot of the latest Sex and the City movie?

Frankie and Johnny (1966) - Elvis is a riverboat captain with a big gambling problem. Is there any other kind?

Paradise, Hawaiian Style (1966) - Another movie in Hawaii? This time Elvis is a helicopter pilot.

Spinout (1966) - Will Elvis get married or drive a race car in the big race? Who cares?

Double Trouble (1967) - Elvis does his best Austin Powers impression as a hip swinger on the loose in England.

Clambake (1967) - Elvis is an heir to a fortune doubling as a water-ski instructor who wishes that girls would like him "for himself." Noooo!

Stay Away, Joe (1968) - An "Indian rights" movie in the worst sense - it exploits American Indians at the same it pats itself on the back for being so open-minded. Embarrassing!

Speedway (1968) - Another racing movie in which Elvis gets upstaged...by Nancy Sinatra and Bill Bixby?! "Don't make me angry, Mr. Presley. You wouldn't like me when I'm angry."

Live a Little, Love a Little (1968) - Elvis gets two jobs and has trouble holding them down. That's it.

Now I know how Elvis felt:

Kenton has left the building.
Posted by Kenton Larsen at 4:07 PM