Comedy CDs: let's go drink to the death of a clown! 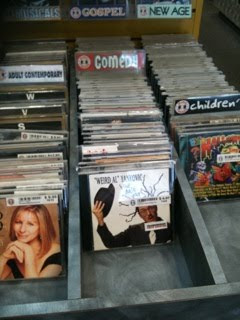 Thank you. Good night!
It's a good thing that Rodney Dangerfield passed away before he really stopped getting respect.

Because if you think that the poor musician has it bad in this era of free downloads and bitTorrents, save some pity in your heart for the poor stand-up comic.

I love listening to stand-up comedy CDs when I go on long road trips, the perfect cure for the alternative: staring out the car window for nine hours and thinking, "Gee, this looks like a John Mellencamp video." 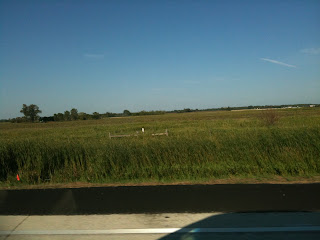 I see no rain, scarecrow, blood, or plough here.
But evidence points to this pastime being as hip as taking a horse and carriage to the talkies, slipping a mickey, or reading a news (get this!) paper.

I recently found myself standing in line at Borders on Chicago's Magnificent Mile, where I bought up much of the store's catalogue of $5 comedy CDs - Don Rickles, Gilda Radner, Joe Rogan, Doug Stanhope, Bob Newhart, and Bill Cosby.

When I got to the counter, the young checkout clerk gave my purchases a glance and looked at me like a scientist looks at a cow's eyeball she's about to dissect.

"What are these?" she asked.

"What do you do with them?"

"I listen to them on road trips."

"And they're just people telling jokes?"

"Just sell me the damn CDs!"

OK, I made up the last line to try to save face, but the message was pretty clear: the whole idea of buying a CD (gasp!), listening to comedy (gasp!), and listening to it again someday (gasp!) was a pretty foreign concept to this person. 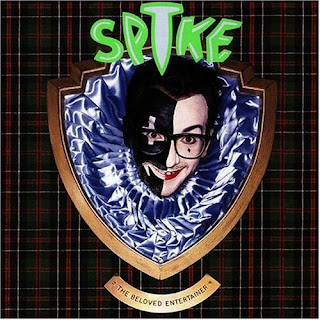 I guess I shouldn't be surprised. The heyday of the stand-up comedy record was the 60s when Bob Newhart and Bill Cosby ruled.

On Mad Men last season, Paul puts on Bob Newhart's The Button-Down Mind album and says, "It's not Lenny Bruce, but it's good" as everyone stands around the record player listening and laughing.

Get this: in 1960, Newhart outsold Elvis Presley and the Sound of Music soundtrack and won a Grammy for "Album of the Year" by telling stories as one half of an overheard phone conversation.

Here, Newhart talks about what it would have sounded like if Abe Lincoln had a press agent (the audio starts at one minute - don't let this dude's questionable intro stop you!):

Listening to this today, I'm shocked by a number of things:
Fear of silence

Bob Newhart is one of my favorite comics, but I'm not sure that it would be possible for a comic to get away with this anymore. Any comic.

One second into the part about reading a book and..."Boooooring!"

Check out the very successful Dane Cook and his pathological fear of losing the audience for even a second:

Today, you can't assume that the audience will go along with the bit, because the audience probably won't, and certainly not with something seven minutes long that presupposes their familiarity with the Persuaders.

However, it might get the crowd to light torches and brandish six guns as they chase you out of town.

"Can you believe that this guy thinks we read books, didn't tell one dirty joke, and expected us to listen for seven minutes. F*** him!"

I hosted at Rumors for years, and I remember seeing John Wing - a prickly comic at the best of times - mention MIT in a punchline to no laughs.

"What's that?" asked an audience member.

"Massachusetts...Institute...of Technology!" he yelled. He left the stage a few minutes later to a true smattering of applause.

The Internet has brought us a lot of great stuff, but longer attention spans isn't one of them.

To the stand-up comic, this means that it's become harder and harder to come up with original premises that hold the audience's attention. Uh-oh, time to get back to basics: airplanes, visits to the doctor, women going to the bathroom in groups, Transcona. Wah, wah, wah.

As a teacher, I can also vouch that it's officially hard to compete with email, text messages, and online pornography, at the audience's - er, students' - fingertips, mobile and on demand!

When a student stares back at me with a glassy stare and one hand is under the desk it can only mean one thing. Not that! It can only mean that there's some text messaging going on. When that happens, a little piece of me - and teaching and learning - dies.

The poor comedian has the same problem. No matter how great and entertaining you are, somewhere in the audience, someone is thinking, "I wonder how the kids are doing. I'll just check my text messages for a minute..."

If you're still paying attention, here's the point:

If we can no longer give someone our "central attention" when they're standing right there in front of us, staring us in the eye, what hope is there for the poor stand-up trying to get our attention on the outdated format called "CD?"

Have we still got drinking?

Posted by Kenton Larsen at 8:54 AM