"The scary and terrible downtown campus!" On second thought... 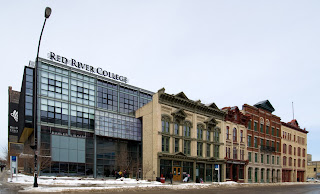 Photo taken by CreComm grad Mark Reimer, who was lucky to escape with his life.

I came with the building.

I always know how many years I've been teaching at Red River College's downtown campus, because I started the same year that it opened.

I remember it well. That year, my students signed a petition against having to learn at the dangerous downtown campus with no parking and lobbied to finish their education in the much safer and parking-imbued confines of the Notre Dame campus.

The media covered the kerfuffle.

Long story short: that year, the very same students attended Red River College's new downtown campus, where their worst fears were realized as they were knifed and beaten every day on their 10-mile walks to their cars. All's well that ends well!

Of course, I'm kidding. If there's one thing I've learned in my years of working and teaching, it's this:

Fear of the unknown + A little knowledge = The sky is falling!
Not to mention a great song by Marvin Gaye!

I once worked with a person who we actually called Chicken Little - to her face! - because whenever she got wind of something, she ran around the office telling anyone who'd listen that the sky was falling.

(By the way, the only time I ever saw this person happy was when a computer inexplicably burst into flames one day. Finally, the sky had fallen!)

Without exception, her "iron-clad info" was based on something she heard "though the grapevine" - the informal communication network that operates in every corporate and educational environment.

The grapevine sucks. It's like the telephone game: you start the game with "I love you," whisper the message into the person's ear next to you, and so on. By the time the message gets back to you, it's "You should lose weight." Hilarious stuff!

The lesson is that "experience" beats "fear of the unknown" and "a little knowledge from the grapevine" every time.

In the case of Red River College's downtown campus, the students very quickly realized that they were in a state-of-the-art campus surrounded by awesome classmates, bus routes, parking, bars, and restaurants.

Hell, we even got to meet Prince Philip - the frigging Duke of Edinburgh, people! - when he toured the facility. I still remember him asking one of our students, "Is your flat as messy as my grandsons'?" The student's answer: "Pa-pa-pardon me?"

When there's an active rumor mill and limited information, you're wise to remember the great journalism adage and the wise words of philosopher Flavor Flav, respectively:

1. "If your mother tells you she loves you, check it out."

Posted by Kenton Larsen at 2:51 PM