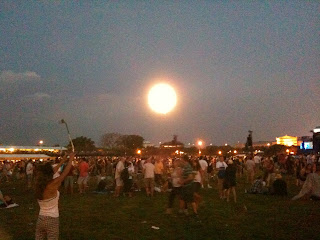 Reaching out for a better Lollapalooza 2011.

I've heard of bands selling out, but overselling out?
I made the trek to Lollapalooza this year, as I've done twice before; originally a touring music festival, it now takes place over three days every summer at Chicago's Grant Park, where the happy vibe of Barack Obama's famous presidential acceptance speech still lingers in the air.

I've loved the festival in the past. It's like a Winnipeg Folk Fest plus troubled teens, mosh pits, scorching heat, huge corporate sponsors, and even bigger crowds.

And that's where the trouble started this year: Lollapalooza expanded across Columbus Avenue to encompass 110 acres, which allowed the festival organizers to sell something like 280,000 tickets over three days, up significantly from last year.

That alone is an impressive number, but if you count people who sneaked in or used another person's wristband to get in, and you consider the scorching heat and humidity, the "felt like" attendance number was much closer to two or three million.

No joke: the first thing I saw when I arrived at the festival was a ticketless guy bolting through the gates. A security guard quickly wrestled him to the ground, but the guy was sweaty, so he slipped out of his shirt and sprinted away with his arms held high.

The security guard did get back at him, however, with a well-timed, "Got yer shirt, bitch!"

How do you define "expanded?"

The big problem is that the expanded festival didn't expand in the right areas (if you know what I mean - zing!) because the standing and sitting areas around the stages were the same size as previous years.

More people in the same-sized concert areas meant that it was next to impossible to get within eyeshot of your favorite bands on the smaller stages, like Metric and the xx.

Close quarters at concerts are great - if you're a groper, pickpocket, cutter, pusher, shover, or smoker who wants to get revenge on everyone else by huffing on a big cigar in the middle of a crowd in scorching, 45-degree heat (which one particularly lame-ass dude actually did!).

The level of pushing, shoving, and cutting in front of others reached a fever pitch on Saturday, the worst I've seen in 30 years of attending concerts - do you hear me Hulk-sized dudes who show up at the last minute and stand in front of 18-year-old girls?

Adding to the attendees' agony is that there's no seating and the festival bans all but one bottle of water per person and "outside food."

My first sign of the Apocalypse should have been the group of bonehead protesters outside the festival, who had an axe to grind with rock, Star Wars, women, gay rights, Heath Ledger, and anything else that's actually good.

See my oh-so-creepy YouTube video here, where their dopey leader trash talks women while being protected by Chicago's finest - all women. 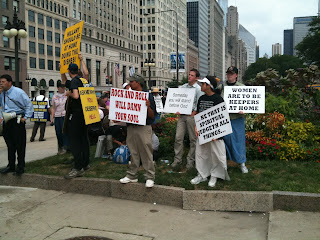 Oh, yeah: there were bands! 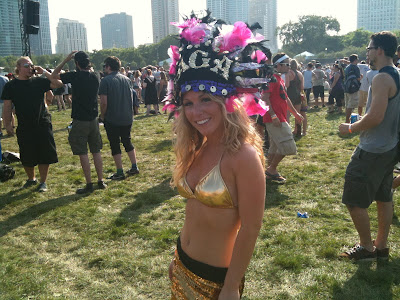 I'd like you to meet my wife, Gaga.
Day one of Lollapalooza could've been subtitled "Waiting for Gaga," as the good lady herself returned to the festival after a terrible performance at there just three, short years ago, before she was LADY GAGA! - the dark times before Poker Face grabbed us by the throats, strangled us, and took us to dance-pop heaven.

To mark the occasion, the park exploded with young women and children decked out in their finest Gagawear. So when Lady Gaga finally appeared on the mainstage at 8, the crowd was ready to...Just Dance-dance-dance-dance-dance...

Near as I can figure, Lady Gaga is selling two things: a toned buttocks and "the ability to be whoever you want to be." Mostly the former.

Her concert is really a big, overblown Broadway production that isn't unlike a Madonna or Gwen Stefani show, but for the looooooong pauses between songs to pad out the fact that Ms. Gaga has precious few songs to play.

Other hit bands that day included Devo ("Whip it!" is irresistible anywhere), Hot Chip with Ringo Starr on drums?!, and the Strokes, who played a spiky greatest-hits set opposite Lady Gaga.

We wandered between the Strokes and Lady Gaga - the perfect blend of sweet and sour. Which is which depends on whether you prefer to wear a leather jacket or chaps.

The best band at the festival

Day two started promisingly with my surprise favorite band of the festival - even better than Lady Gaga! That band is the Kissaway Trail, "the Danish Arcade Fire" that I thought was even better than the real Arcade Fire, who performed the following day.

This band reminded me why I still go to music festivals: to leave having a new, favorite band.

Judging by the audience's reaction to the Kissaway Trail, I wasn't alone.

After the set, I met the band members and was delighted to discover that they're loads of laughs and just plain, good people. There is nothing rotten in Denmark: book your plane ticket today!

After that, things got ugly as the attendance swelled. The xx sounded great, but I sure as hell couldn't see them. Metric represented for Canada, but same deal.

I got closer to Edward Sharpe and the Magnetic Zeros, who led the crowd in an awesome singalong rendition of their hit, "Home," but then brought everyone down by trying to get them to sit down so the band could "try something cool." Never did find out what it was, because I was crushed to death by a guy the size of a Volkswagen.

Empire of the Sun was also impossible to see up close, but their set of dance hits was entertaining even from a mile away. Their relentless beats, outrageous costumes, and dancers with trout masks - are you watching, Captain Beefheart? - would make Lady Gaga go green with envy.

Green Day closed day two with an entertaining set of Broadway hits, much like Lady Gaga did on day one, but - for the love of God - the band has to stop with the Day-O! singalongs and their penchant for bringing up every last one of their fans onstage.

By the time it was my turn to get onstage, Billy Joe's mascara was runny, it was 2 a.m. and everyone else had gone home.

Could someone also please hit me in the head with a baseball bat, so I could get this out of my head?

A new day, a new attitude!

On the last day, the worst day behind me, I was ready to make amends with the festival and went with a new-and-improved "I will not get mad when people shove me" attitude.

It kind of worked.

In million-degree heat, I succumbed to the quiet, folk-rock greatness of Mumford & Sons, bobbed my head merrily along to the peppy songcraft of the soon-to-be-big Hockey, and finally "got" what's great about the National - they're today's Joy Division!

But MGMT completely and utterly lost the crowd with some terrible and terribly paced songs - by the time "Time to Pretend" and "Kids" came along, almost nobody was around to enjoy them.

Those of us who were could only think, "Yeah....these songs were probably flukes."

Then came the hanging offense.

After a long, long weekend, Arcade Fire finally showed up onstage. I was ready for my fellow countrymen take Lollapalooza by a storm - I love the new CD and was really interested to see how the new songs would stand up against their old stuff.

But there was a terrible, black spectre hanging over their performance in the shape and form of Soundgarden, who got a half-hour jump on Arcade Fire at the opposite end of Grant Park.

And for the first time in the festival's history, I couldn't enjoy a band at one end of the park (Arcade Fire) because another band at the other end of the park was too loud (Soundgarden).

Lemme tell ya: if you think Arcade Fire has some great tunes, they're even better with insane bass solos and drum fills played over them by another band.

Was this Soundgarden sticking it to "the new kids?" A mistake? Some sound guy's idea of hilarity? Who knows, but it really, really sucked.

As well, Arcade Fire seemed somewhat muted from the last time I saw them - a little tentative around the new songs and a bit weary. Standing in the mud, watching one of my favorite bands get ruined by one of my least-favorite bands, I knew exactly how they felt.

I hope that next year the Lollapalooza organizers will remember that the festival is about the music, not so much about cramming in as many people as possible into the same, old space.

To end this year's review on a positive: love the Chicago skyline! 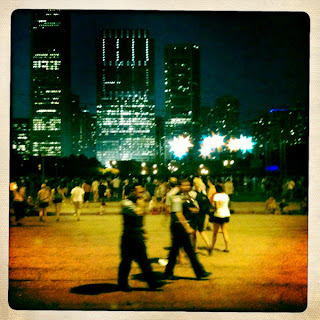 Two cops for every 50,000 people should be about right.
Posted by Kenton Larsen at 8:21 AM