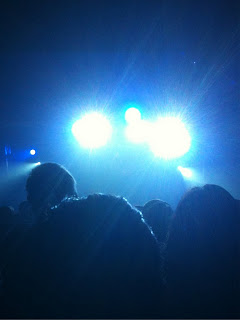 We are not alone.
It used to be easy to be a concert fan in Winnipeg.

When I was a kid, the general concert-attendance rule was simply "see every show that comes to town," because no shows ever came to town.

So, if weak artists on their way out showed up - David Lee Roth with special guest Andy Taylor without Van Halen and Duran Duran, anyone? - they'd still get book the arena. You'd get up at 6 a.m., stand in line all day for tickets, and be grateful to get something in the last row of the nosebleed seats.

At the show, you'd pay attention to every, little nuance and consider every last word that David Lee Roth had to say, no matter how boneheaded it was.

You'd drink up the concert like the last bottle of a fine wine, scrapbook the ticket stub, and talk about it for the rest of your life, because you knew that the artist would never come back.

My friends and I would also drive to Minneapolis to see concerts three or four times a year. Minneapolis was the land of concert milk and honey, and we saw everything we could: the Violent Femmes, Peter Gabriel, Bow Wow Wow, the Pixies, U2, Belly, Throwing Muses, Psychedelic Furs, Jerry Seinfeld, the Sounds, Weezer, Bruce Springsteen, Queen, Elvis Costello.

We agreed that if we lived in Minneapolis, we'd be broke for an embarrassment of great concerts.

But we also noticed that Minneapolis concert fans weren't as excited as Winnipeg concert fans to see their heroes. In Minneapolis, the crowd greeted John Mellencamp with friendly applause. In Winnipeg, the roof nearly caved as the crowd screamed, "Oh yeah - life goes on!"

Now, thanks to the perfect storm of MTS Centre opening up at the same time that the idea of paying to buy recorded music evaporated, we're the new Minneapolis. We get every tour from everybody, multiple times a year.

It's one of the only ways an artist can make money these days. As actor/singer Juliette Lewis said from the stage at her latest show at the Pyramid, "I'll be signing autographs at the merch table after the show, because that's how I make money when I go on tour."

Any idea how many times the Black Eyed Peas have played here? Five? Six? 200? Gwen Stefani with or without No Doubt? Even Tom Petty, who ignored our city for 30 years without batting an eyelid, has played here twice in 12 months.

As we know, the law of supply and demand states:

Which means: as musicians come back over and over and over, audience demand to see them goes down, especially in the absence of a hit album or song. As more concerts come to Winnipeg, the idea of going to a concert seems normal, not special.

That might explain why, in recent times, there has been a sudden burst of "last-minute ticket sales" to concerts at MTS Centre for the low, low price of $5.

How would you feel if you paid $500 for your tickets, and found out that the guy next to you paid $5?

There's also no doubt (see what I did there, Gwen?) that a guy who pays $5 for a concert isn't going to feel compelled to "get his money's worth," because in his mind, the experience isn't worth very much. It's the classic case of a sales promotion decreasing a brand's value.

If everyone else in the crowd has seen the artist six times, maybe they won't be into the show that much either, proving the old adages that familiarity breeds contempt and absence makes the heart grow fonder.

What does it matter, then, if they gab to their friends or push their way past you during the "boring songs" to go pee or buy beer - hundreds of times a show? The artist will be back next year anyway, right?

And what of the arseholes who yelled out so many "suggestions" at the recent Neil Young Concert Hall shows, they ruined the show for everyone else and even garnered mention in the Globe & Mail review?

At the last Bright Eyes show, I sat next to a bonehead who talked to his "would-be girlfriend" (keep trying, kid) for the duration of the show. And Bright Eyes can get really, really quiet. During one of my favorite songs, I couldn't take it anymore; I finally suggested that the young man "shut up."

We were at an impasse, as it became clear that my definition of a concert is "listening to the music" and his was "talking during the quiet parts."

Out here in the field...

As the concert experience erodes, and it's no longer a special night out, I have to wonder: what are the odds that anything I'll see will live up to the time I saw David Bowie in the front row of the Arena? Dane Cook's surprise show at the Pyramid? Arcade Fire at the Burt? Green Day at Le Rendezvous? Queen - with a real, live Freddie Mercury! - at the St. Paul Civic Centre?

I still love it when the occasional show surprises me, grabs me by the throat and won't let go - the Kissaway Trail at Lollapalooza, the Hives at the Burt, Elvis Costello at the Folk Fest, The Who and Roger Waters at MTS Centre (not together) - but I wonder if the surprises will get fewer and further between.

We'll find out at the Flaming Lips. I'll be the angry guy telling everyone else to shut up.
Posted by Kenton Larsen at 9:50 AM