The balcony closes forever on At the Movies 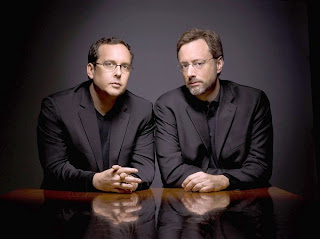 A.O. Scott and Michael Phillips' publicity pic.
I remember the first time I ever had an inkling that there was a profession out there for me.

I was 10 years old. Star Wars and Annie Hall ruled the box office. And my favorite TV show was Sneak Previews on PBS - a commercial-free movie review show starring my heroes: Gene Siskel and Roger Ebert.

My desire was solidified some years later when the satirical Spy magazine compared the salaries of the over- and underpaid. According to the magazine, Siskel and Ebert made $1 million a year each compared to a paltry 10 cents per annum for Mother Teresa.

Some 30 years later, At the Movies - the show that Sneak Previews became - is going off the air. The last episode is scheduled to run at 2 a.m. Monday morning on CTV Winnipeg (the start time is herky jerky: if you want to be sure see it, set your DVR to record from 1 a.m. to 4 a.m.).

I hate this film - and you, now that I think about it

Siskel and Ebert brought serious movie criticism to TV, but even more than that, they brought smart discussions and passionate arguments about all kinds of movies to the U.S. and Canada, blockbusters and art-house films alike.

Each week on Sneak Previews, they'd review four or five films, give them a thumbs up or down, and crown one "dog of the week" - the worst movie they'd seen in the last seven days.

The commercial-free format gave them time to show extended film clips and talk and (mostly) argue at length.

As the show went along, Siskel and Ebert's attacks on each other got more personal and hilarious, as shown in their review of Bachelor Party, where Siskel also calls Tom Hanks "The poor man's Bill Murray." Ha!

You always knew you'd seen a great show when the guys went off the cue cards and started making bald and fat jokes at each other's expense, like they do here on this classic Late Night with David Letterman clip:

Over the years, Siskel and Ebert proved the cliche, "the reviewers became as famous as the movies they reviewed." Their patented "two thumbs up" - praise from both critics! - is still used today as a way to describe something that's indisputably great.

They achieved the highest form of praise (in Canada at least) by becoming the target of an SCTV parody with Dave Thomas and Joe Flaherty:

Siskel and Ebert also rescued many an art-house film from oblivion - most famously, My Dinner with Andre, a 1981 film depicting a dinner conversation between playwright Wallace Shawn and theatre director Andre Gregory.

The departure of Siskel and Ebert

Sadly, Siskel passed away in 1999 after undergoing surgery for a brain tumor, and Ebert's battle with thyroid cancer has left him unable to speak, though he continues a vibrant online presence on his blog, the Chicago Sun-Times' website, and Twitter.

Even after Siskel and Ebert left Sneak Previews, I continued watching the show through all of its incarnations. Forgive me if I've missed any:
Why has the show been cancelled? Here's what Ebert says on his blog:

"Blame the fact that five-day-a-week syndicated shows like Wheel of Fortune went to six days. Blame the fact that cable TV and the Internet have fragmented the audience so much that stations are losing market share no matter what they do. Blame the economy, because many stations would rather sell a crappy half-hour infomercial than program a show they respect. Blame the fact that everything seems to be going to hell in a hand basket."

While it's true that a glut of online critics has made the necessity of a TV movie-review show questionable, I also appreciate that "the youngsters" today have an opportunity that I never had until later in life to watch films on a variety of media, post their personal thoughts about them on a blog, and then discuss them with the world.

CreComm student Jennifer Hanson, for instance, is watching and reviewing 200 movies this year on her website 200 Movies 1 Woman 1 Blog, as recommended by friends, family, teachers, and you and - in a neat twist of fate - recently had her Twitter-sized review re-tweeted by At the Movies. Nice!

For me, the show's move to commercial TV was the beginning of the end. Suddenly, the reviewers didn't have room to breathe: they had to review more films in less time, necessitating talking over the film clips and making one or two quick points before going to commercial.

Apart from writing some movie reviews for Red River College's the Projector, some quick-hit reviews for the Winnipeg Free Press on my internship, and the occasional review on Amazon.com and this blog, I never did pursue my film-review career with any degree of seriousness.

Now, I mostly watch movies that I download online and on Apple TV - I've got Kick Ass, Clash of the Titans, and A Million in the Morning cued up as we speak. Many more use video on demand, rent DVDs, or have Netflix memberships - coming to Canada soon!

More movies are available to more people all of the time, which means that film fandom will continue to thrive in the world with or without At the Movies. Good for the movies! But, I have to say, I'm really going to miss the show, Siskel, Ebert, Roeper, Scott, and Phillips all.

It's the end of an era. The balcony is indeed closed. I'm sad.
Posted by Kenton Larsen at 7:42 AM