They're not booing, they're chanting "Looooou."
I finally did something I've been wanting to do for over a decade.

You'd be forgiven for guessing that I became a pod racer on Tatooine - that one's still on my bucket list. No, I finally attended Lollapalooza in Chicago, America's premier alternative music festival.

(I attended the traveling version of the Lollapalooza festival in New York in 1994.)

It took Lou Reed, the leathery, grouchy, elder statesman of alternative rock to get me there, and he made it well worth the tortuous drive and 15-year wait.

The atmosphere at Lollapalooza is a combination of celebratory and chilled out: think the Winnipeg Folk Fest with 225,000 people, mosh pits, crowd surfing, and a temperature of 38 Celsius, just a shade over 100 Fahrenheit. 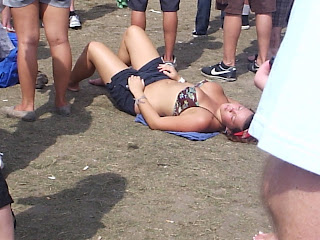 Top o' the morning, milady:
A modest Lollapaloozian enjoys the dulcet sounds of the Kaiser Chiefs.
Adding to the attendees' agony is that there's no seating, and the festival bans all but one bottle of water per person and "outside food" - the better to sell yucky hamburgers for $5.

At the security gate sits a sad buffet of confiscated homemade sandwiches in their Saran Wrap alongside seized bottles and cans of Gatorade and Red Bull. Yet, somehow, the drugs get in. Just like prison!

On the plus side, the festival is well organized. The bands start on time (except Lou Reed), people are mostly considerate of each other's space, the $7 pina-colada and mango smoothies taste suitably cold and fantastic, and security around the festival is impressive to behold, maybe because Chicago doesn't want anything to happen that might endanger its bid for the 2016 Olympics.

The mainstages sit at opposite ends of the park and there's enough space between them that surprisingly very few sound conflicts happen, unless you happen to be Band of Horses playing kitty-corner to Jane's Addiction at the same time, thanks to Lou Reed leaving the stage 15 minutes late. You tell Lou he went long.

At the centre of the festival sits the Buckingham Fountain, better known as "the fountain from the Married With Children credits." I give the overheated and exhausted attendees all the credit in the world for waiting until the end of the day to jump into the water, at which point even the surliest of security guards could forgive a guy for wanting to cool off. 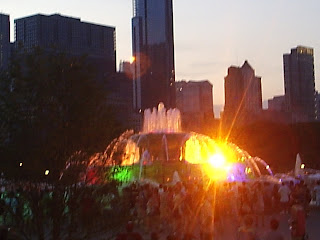 Ask yourself: what would Ed Bundy do?
The music

The main issue with Lollapalooza isn't that there aren't enough good bands; if anything, it's that there are too many of them playing at the same time.

Some of the Sophie's choices at this year's festival:
There seemed to be a consensus among Chicago music critics that this year's festival was the worst lineup of all time, but it might be a case of being spoiled by an embarrassment of riches year after year; I know that if we got this festival in Winnipeg, it would sell out in an hour.

Like all outdoor music festivals, the setting doesn't translate well for some bands and is perfect for others.

An excellent band like Bat For Lashes, for example, has some great tunes that would captivate any well-fed, comfortably seated audience in a dark theatre. On an outdoor stage, under the scorching sun, before a hungry, uncomfortably standing audience, not so much. But points for trying.

On the other hand, a band like the Kaiser Chiefs isn't very well known in America, but has a lot of experience playing to large festival crowds in England, where they're much more famous. They also have some great songs and a whole lot of swagger.

Never mind that their most recent album stinks; the band wouldn't take no for an answer, assailing the crowd with singalongs, scissor kicks, and attitude.

"I'd like to buy you people a beer," shouted frontman Ricky Wilson, "as long as it's not a Bud." Oooh, there's no better way to prove your authenticity than by sticking it to the main festival sponsor from the mainstage. 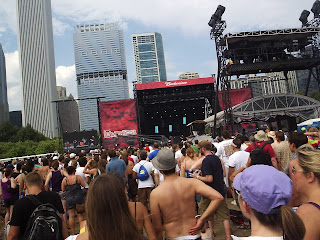 Excuse me, friend - I'm trying to get to the front of the stage.
Waiting for Lou

Despite seeing some of my favorite bands, like the Raveonettes, and some buzzworthy new ones, like Passion Pit, for me much of the day was about "Waiting For Lou."

Lou Reed was the sole living legend on this year's bill: this is the guy who survived electro-shock therapy, wrote songs for Pickwick Records, founded the Velvet Underground, was mentored by Andy Warhol, has recorded as a solo artist for over 30 years, wrote "Walk on the Wild Side" and "Sweet Jane," once punched David Bowie in the face for not paying a bar bill, is married to Laurie Anderson, and is "the original rapper," speaking in rhymes before there was even a name for it.

At first there seemed to be some doubt that Reed was even going to show up. The stage was set up, the instruments awaited, and...no Lou, after every other band had started and finished their set on time.

A famous curmudgeon, it's never exactly a sure thing that Reed will show up or, if he does, that you'll get anything resembling a set of "greatest hits." Like Bob Dylan, Reed plays the songs the way he wants to play them and if you have a different opinion, that's your problem.

Finally, the crowd let out a roar as a muscular and visibly grumpy Reed walked out onto the stage with his band and, without a single word to the audience, swung a guitar over his shoulder and played the famous opening chords to "Sweet Jane." Grown men wept.

Between his lines, Reed shouted at technicians and barked orders at his band, who uniformly took it with good humor. "Oh, well, that's just what he's like," their body language seemed to be saying.

At the end of the song, Reed removed his guitar, set it down on the stage behind him, pointed to it, cast a killer glance at a techie offstage, shrugged his shoulders and - if my lip reading is correct - said, "What am I supposed to do with this fucking thing?" That's my Lou! 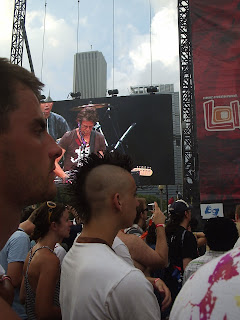 An inconvenient haircut: an angry, young man enjoys a grumpy, old one.
Launching into "Senselessly Cruel," "Dirty Boulevard," "Waves of Fear," and "Mad," it started to look as though grandpa Lou was really a softy on the inside: if we weren't going to get a greatest hits set, we were at least going to get Reed at his most upbeat and commercially friendly.

And we did, until Reed launched into a white-noise frenzy as grating as anything on his famously bad (or is it genius?) Metal Machine Music album. Cranking the white noise to 11, no melody required, Reed seemed to delight and confuse the audience in equal measure.

Though some people clearly hated it, I took the noise break as Reed sending a message to the youngsters in the audience: "You think you like some hardcore bands? Well, I invented hardcore, and I'm going to show you how it's done."

At this point, the clock on the wall showed that Reed's set was about to end; I figured that he'd cut the feedback, walk off the stage, and leave the audience to consider whether the big ending was art, junk, punk rock, or some elaborate practical joke.

Just when I thought all hope was lost, the noise segued into the bouncy keyboards that any serious music fan would recognize as the intro to the Velvet Underground's "I'm Waiting For the Man." Miracle of miracles, Reed followed this great gift with something even greater: a groovy rendition of "Walk on the Wild Side."

Even more amazingly, Reed led the crowd in a singalong, blew kisses, said "Hey, Chicago!" and gave the crowd a big wave and smiled as he descended the stairs to...Hell or his Winnebago.

The set came across as fun, tough, acerbic, authentic, and uncompromising; all befitting of a legend. 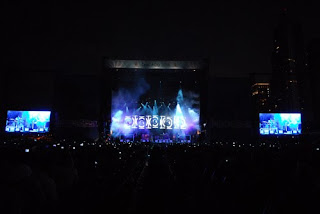 I'm Mr. (yawn) Brightside!
Half an hour later, the Killers - a band I usually like - performed their headlining set. In comparison to Reed, they seemed a little hollow, desperate to be loved, and in possession of precious few great songs.

And at the end of a long, hot, sandwichless day, the crowd ran out of gas a few songs into the Killers' set. The band's subsequent pointless banter about their trip to Chicago was enough to send the most hardened Killers fans to the exits, which they did in droves.

"Wow, you sure got quiet fast," said frontman Brandon Flowers. Uh, yeah, it's all of those songs from your new, crappy album that you're playing...

And Lou Reed, who was in the park, didn't join the Killers for their big duet on Tranquilize. Too bad - it would've been fun to see Grouchy McGee teach Happy Gilmore a thing or two.

As any pod racer on Tatooine knows: Killers aren't born, they're made.
Posted by Kenton Larsen at 11:23 AM