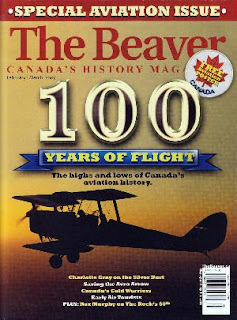 I used to do a bit on The Beaver magazine in my stand-up act. Sadly it will expire in about another couple of weeks, if that. The bit and the act.

RIP, The Beaver. And RIP this "hilarious" bit:

"We'd have to put on a disguise. Sneak around the store, look for the dirty magazines section. Take one off the stand, tip toe to the checkout. Lower your voice: "How much for the Beaver magazine, kind sir?" Sneak it home, wait for my parents to fall asleep, and get out my flashlight."

"And then it was, "Ahhhhh - what have you got for me The Beaver magazine! What!? It's a Canadian History magazine!? OK, I guess I'll read about the invention of Medicare."

"Six hours later, I'd wake up drenched in sweat, "Wow - Tommy Douglas was the greatest Canadian!"