McNally Robinson bookstore: can and should it be saved? 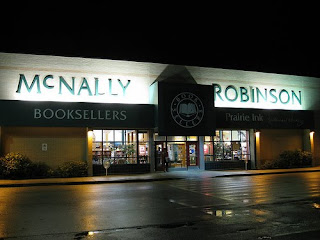 Cheer up, bookstore.
We may soon be closing the book on bookstores.

At least that's what crossed my mind yesterday as I spent a couple of hours shopping at McNally Robinson's Grant Park location.

I love shopping for books, and at that bookstore in particular, but my goal yesterday wasn't shopping for shopping's sake: I had over $140 in McNally gift cards and I thought I'd better spend them before the store closes for good.

Of course, I have no insider information whatsoever that this location will shut down soon or ever, but by now everybody knows that the bookstore recently filed for bankruptcy protection, closing two of its stores - including the big one at Polo Park - citing a bad economy and competition from e-books and the Internet.

The Free Press' Morley Walker says the store was "expanding too fast" and taking on "too much debt."

(Disclaimer: the Polo Park McNally store never had the magical vibe of the Grant Park location, or the old Portage Place location for that matter, so it didn't surprise me that it would be the one to close: too much "stuff" and not enough "vibe.")

So, I spent my gift certificates and $40 more on ANNA and Monocle magazines, two travel books on Iceland, Ken Auletta's Googled, Mike Thomas' Second City Unscripted, Carie McLaren's Ad Nauseam, and Bob Newhart's 1967 comedy CD, This is It (not to be confused with the Michael Jackson film!).

With my purchases in hand, I felt like a noble conservationist, the Jack Hanna of the bookstore set, doing my part to save an endangered species.

Then I thought about it:
The argument

I love technology and I love books, so what am I supposed to do? I've recently expressed this dilemma to some of my friends, and been surprised by the two very different reactions that I've been getting in response:

"We have to shop at McNally Robinson as much as possible to keep the store afloat."

"I've been ordering books from Amazon for 10 years, and if McNally couldn't see this coming and can't run their business so they make money, that's their problem."

I can see both arguments.

On one hand, my consumer needs are being better met than ever before. I order and download stuff from Amazon at least 10 times a year, which I've been doing since pretty much the birth of the site.

Unlike a lot of people, I've never had a problem with entering my credit card number online, especially after discovering that Amazon actually works: the stuff often arrives at my front door just two days after I order it - from the U.S. and the U.K.

After hundreds of orders, I've only ever had two problems: Amazon.co.uk once sent me an empty CD case instead of one with a CD in it, and Amazon.com once sent me five Magnetic Fields CDs I ordered - twice!

I actually tracked down a customer service number, called the company, and the kindly gentleman said, "Since the cost would be prohibitive to send them back, just keep them." No problemo, kind sir!

McNally, on the other hand, is a local institution. It's made for browsing and impulse buys (unlike websites, which aren't). There are always great friends and interesting strangers hanging out there. It's the best place in town to buy local books, and go to the book signings to get them autographed. The people who work there know their books. And it just feels nice to be there.

But I used to feel that way about music stores. Now, I still browse in the few remaining music stores - HMV, Music Trader, Into the Music - and I still love them, but rarely do I make a purchase of any significance: I've got thousands of CDs at home, not to mention song downloads on my iPod and iTunes, and free music videos on YouTube, so how much more music do I really need in my life?

The iPod showed us that everyone could have the exact same music collection, but what really mattered was the device. The Kindle does the same for books - people notice the device, but no one asks you what you're reading on it; for all they know, you're staring at a blank screen.

The future of the bookstore?

The best hope for the bookstore is to play up the things we love about it - the experience! - link it to the convenience of buying books in a variety of formats, and to find new ways to get us to pay for the privilege.

Maybe the future of the bookstore will be something along the lines of a library meets book club meets coffee shop meets social club meets entertainment venue: you pay an annual fee to read, borrow, print, or download anything you like, attend events, drink coffee, and hang out with your friends.

If the act of reading isn't about the content, then it's got to be about the device or the bookstore. If it's not about the bookstore, then before we know it, McNally Robinson will only be in the business of selling nostalgia.

Posted by Kenton Larsen at 5:33 PM