Your advertising is in my art! 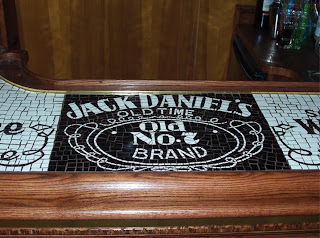 Is it art or advertising?

That question has plagued mankind since the beginning of time, even before Andy Warhol painted 32 Campbell's Soup cans in 1962 - one painting for every flavor that Campbell's offered at the time.

Warhol also painted portraits of Coca-Cola bottles, which he explained by saying:

Winnipeg is a mosaic, why not Jack Daniel's?

I thought about the old "art versus commerce" debate this morning when I had coffee with Winnipeg artist, Dimitry Melman Komar, perhaps best known for his City of Winnipeg logo and coat of arms mosaics at City Hall and the Sugar Mountain jelly bean mural at The Forks (download the pdf here).

Dimitry is an interesting guy; he was born in Moscow and immigrated to Canada at age 18, where he studied art history and design at the University of Manitoba. He also trained in France, and learned about mosaics in Italy, Spain, and Morocco.

When he creates a mosaic, he does so with painstaking detail, creating each one the only way it can be created: one piece at a time. It is, without a doubt, art.

Flipping through his portfolio, I couldn't help but notice the above Jack Daniel's mosaic among the art, which he did as a private commission for a client. Interesting that the person could've commissioned a mosaic of a loved one, a pet, an original work of art - anything! - and he (it's gotta be a guy) chose Jack Daniel's.

Should more ads be art?

If more people - advertisers and the target audiences who buy their products - thought of campaigns as "installations" and we created them the way that Dimitry creates mosaics, we might not mind the advertising clutter as much as we do now.

However, it's also true that advertising has a job to do - sell, sell, sell! - and there are those who say that once it becomes too much about "art" and not enough about "selling" that it's time to quit your job in advertising and become a painter.

But where's the money in that?

There's nothing wrong with subtlety, depth, and resonance. The problem is that it's hard for an ad agency to justify "art" to a client, who - go figure - may not see the need to forgo short-term sales for long-term positive effects on the soul.

Actually, it would be nice to have both. I'm sure that there's a sweet spot that exists somewhere between, "God, that's dumb," and "too hip for the room." The Beatles proved that it exists, but maybe there's a reason that precious few other bands ever have.

The best solution may be to just sign up for some of Dimitry's mosaic workshops, which include "snacks, wine, and music in a supportive, nurturing, and fun environment."