Happle New Year to me and my Apple TV 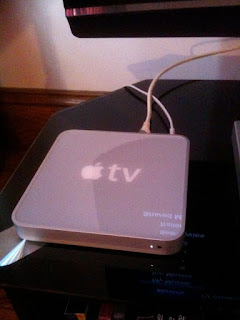 Not being one to enjoy binge drinking, expensive buffets, or open-mouth kissing with strangers, I wisely avoided doing all of the above last night, instead spending New Year's Eve getting to know my Apple TV.

And no, I didn't kiss it at midnight, though I won't rule it out for the future.

I know what you're thinking:

Yes, I drank some more Apple Kool-Aid, as my pal Dan Vadeboncoeur put it in a previous post's comments: I am guilty of being a fan of Apple products, primarily because they're simple and they work - unlike, say, the EQ3 furniture I once bought, "some assembly required." Six days later, I was a hungry, broken man, who still had no usable furniture.

Apple TV, as you can see in the above photo, is a little, square box that connects to your TV with an HDMI cord and to an electrical outlet with a power cord. It costs around $200, HDMI cord sold separately.

Once it's connected, you can rent or buy music, high-def movies, and TV shows and - here's what's really great - it connects directly to your iTunes library, YouTube, Flickr, podcasts, radio stations, and MobileMe, synchronizing everything wirelessly through your TV.

And, yes, it works - a lot better than the EQ3 furniture ever did.

The first thing you notice when you get Apple TV out of the box is that there is no power button, just a square box. You plug it in, it powers up, and loads a menu screen, so you can choose your language preference (I chose German - kidding!) and sync up your iTunes libraries, up to five computers per household.

Apple TV automatically shows up as a device in your iTunes library, and you click on the "sync" button, using the password that's generated automatically by the device. It's really easy to figure out, even for a technological moron like (mobile?) me.

It takes Apple TV a while to sync to iTunes, possibly because I have a million songs in my iTunes library and a handful of videos. After half an hour or so, I had it all synced up to two iTunes libraries, and the Apple TV home menu looked like this: 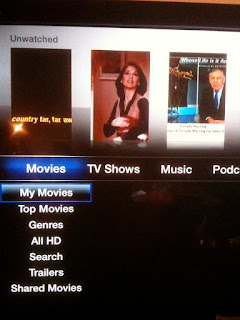 The first, three programs at the top of the screen are ones I loaded into iTunes: an iMovie for a family member's birthday, a classic episode of the Bob Newhart Show, and a 60 Minutes episode I like to show in semester 2 PR when we talk about "corporate culture."

Also noteworthy is that Apple TV doesn't just mush the content from all of the synced iTunes together; instead, you switch between computers, which is also pretty easy to do, just by selecting "shared movies" or "shared music" or shared whatever from the above menu.

For some reason, Apple TV didn't recognize my TV screen's 1080p resolution (whatever that is), so I needed to select it manually from the console's setup menu.

It's weird that Apple TV doesn't have an "off" switch, especially considering that it heats up pretty quickly. Instead, you go to the main menu and select "standby" which puts the unit to sleep, though I discovered that it still updates its content when in sleep mode.

However, there's nothing in the manual that expressly says that you should keep it on or turn it off. It's only the heat that makes me say "off." The good news is that the console is virtually silent, and much quieter than my Shaw digital box, which never stops chirping and crunching, day or night.

The Apple TV remote control is so small, I'm sure I'll lose it within the week. The main downside is that there's no "stop" button on the remote, which means that I still have no idea how to stop the iTunes music from playing, other than by pausing it. There's also no volume switch, which means that you're still stuck using the one that came with the TV.

One of the main features of Apple TV is the ability to buy and rent movies and TV shows, and it's a pretty strong selection. Not surprisingly, it leans heavily on current releases.

I'm especially happy to see loads of movies in the "documentaries" category, which I've never seen in the theatre or at BLOCKBUSTER, but I'm frustrated, if not really surprised, that there's no "foreign films" section.

So last night I played catch up, downloading HD versions of Up, Paper Heart, and - sorry - G.I. Joe (yes, it sucks really, really bad) for $5.99 each. I wanted to rent District 9 again, but it's currently only available for purchase at $19.99. 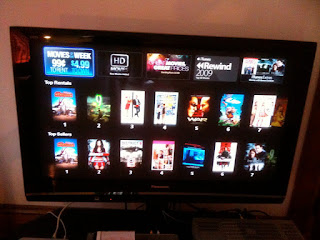 You get charged for the movies through your iTunes account; the movies start downloading immediately, and you can start watching once the download reaches "one per cent," which takes about a minute or two. If you rent the movie, you've got it for 30 days, but once you start watching it, you have to finish it within 48 hours of starting.

You can also download new episodes of network TV, including CBC, NBC, and HBO. Again, the selection is decent, but not exhaustive.

Oddly enough, you can also buy music videos through Apple TV, but I'm not sure why anyone would bother, considering that every music video ever is available for free on YouTube, which brings me to one of the most interesting features of Apple TV: its built-in connection to YouTube.

YouTube's big problem, of course, is that viewers spend five hours a night in front of the TV, but only 15 minutes a day on YouTube (Read about it here).

One issue, as the above article points out, is that YouTube needs a better recommendations engine. Another is what the article doesn't point out: when people leave work and go home, they don't want to sit in front of a computer anymore, they want to sit on a couch in front of a TV.

So, in many ways, Apple TV is YouTube's dream come true: the ability for its viewers to watch clips on a widescreen TV, from the comfort of a couch, using a remote control. Luxury!

I started by watching Devo's great and disturbing video for Whip it! and just kept going with the YouTube recommendations from there ("I Ran," etc). True, some video that's passable on YouTube is too grainy to watch on a big TV, but - overall - I was surprised by the speed at which one can watch videos and the ease of the controls: absolutely no trouble connecting or streaming. 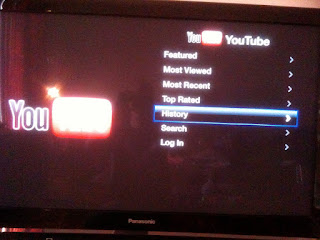 Over the last 24 hours, I've also surprised myself by playing my iTunes music library on shuffle through the TV - it actually sounds much better than the old stereo I've been using, a grad present from 1985. Go figure!

If you leave iTunes alone to play, eventually the screensaver comes up, and it's a real treat: the music keeps playing and floating photos from your Flickr account (if you select that option) of different shapes and sizes appear on the screen, gently gliding by until they spin around and start over again: perfect for your next party.

If you don't want to parade your personal pix in front of the friends and family, you can choose one of the built-in options, including my favorite: high-def pix of floral arrangements. Just pick up some potpourri, and you've got the ultimate smell-o-vision setup.

This is the first application of "on demand" which I've seen that makes it seem like a much more realistic and cost-effective possibility than our current "pay Shaw a subscription fee" model.

One thing's for sure: BLOCKBUSTER is about to start losing $30 a week from me, and that's before the late fees they supposedly scrapped (shamelessly going back on it after that famous "no more late fees!" ad campaign - boo).

Apple TV's movie and video selections are good, but not exhaustive enough to get me to abandon Shaw. Yet! But if I were Shaw, I'd be thinking about it...
Posted by Kenton Larsen at 2:15 PM