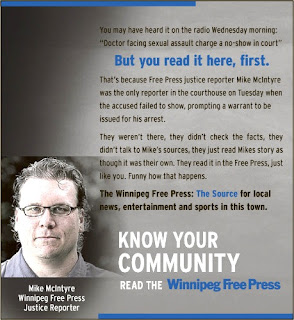 I know this ad launched today, because I read it on ChrisD's blog.
Wait a sec...
Should you know where your news comes from, or is it like what Otto von Bismarck said about laws and sausages: better when you don't know how it's made?

Chris D has posted the first ad in the Winnipeg Free Press' information campaign, which explains to local news consumers where their news comes from. Apparently, the news is not dropped down the chimney via stork, and it doesn't happen when two people love each other very much. No, it's from newspaper reporters who are there, talk to sources, and check the facts.

Unfortunately, the message is a little less convincing when there's a typo in the ad ("Mikes story" sans apostrophe). D'oh!

As I mentioned in my last post: I'm curious to know what the Winnipeg Free Press would like its readers to do after they read this ad. Like most ads, you can't forget to end your message with a call to action, but this one doesn't have a convincing one. Maybe it's nothing more than a campaign to publicly embarrass CJOB - but to what end?

This ad is a risky move. It could be embarrassing if the Free Press is caught not practicing what it preaches. My guess is that other media outlets will be watching the Free Press - especially its Twitter feeds - like a hawk.

Already, ChrisD has pointed out that he's got a credit in today's Free Press for breaking the news about more AC/DC tickets. As Chris says in his headline, "Apocalypse upon us."

I should've pointed out that Mike McIntyre - another former CreComm classmate of mine (he graduated a year after me) - actually has a show on CJOB in addition to the work he does for the Free Press.