Sacrifice is the toughest sell

When going through my Ted Kennedy pix yesterday, I came across this classic U.S. out-of-home treatment from 1980: 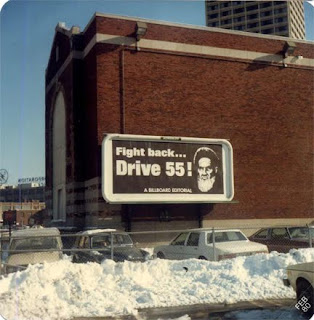 Why, it's Ayatollah Khomeini himself reminding you to conserve gas by driving 55. Yes, that means you too Sammy Hagar.

At the time, the Ayatollah was the most-hated man in America, owing to the Iran Hostage Crisis, where 52 staff at the American Embassy in Tehran were held hostage for over a year.

The Ayatollah became the bogeyman who you could only defeat by by slowing down your car and preserving gas. He even started appearing on T-shirts and bumper stickers, which people bought by the truckload (let's just hope that they weren't made in Tehran): 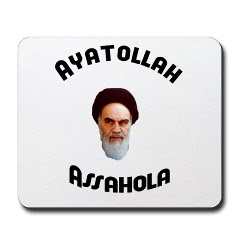 Let it not be said that America trails any country in having the latest name-calling technology at its fingertips.

But it seems that the days of these campaigns are over, as Bill Maher points out in his book, When You Ride Alone, You Ride With bin Laden (the title itself a parody of this classic World War II poster)." 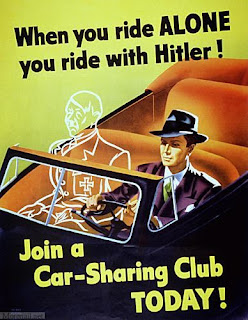 
"Perhaps the most threatening of all the connections we're not making these days is the one between terrorism and one of the great loves of the American life, the automobile. We used to make that connection because the government endorsed it. Oil was regarded as an essential weapon during World War II, and it is certainly no less so today."

"We see in posters from (past) eras a government unafraid to call upon its citizens to curb travel, save tin, buy bonds, plant a victory garden - I believe the United States government should (still) be making and plastering everywhere, like they did in World War I, World War II, and the Cold War."

Is it time for the government to bring back the propaganda posters and PSAs to make connections for people who can't make them for themselves, as Bill Maher suggests? Or are we so used to buying whatever we want when we want because "we're worth it" that "sacrifice" is a product that can't be sold to us anymore, at any price?

We may be the first generation to ask, "Sacrifice? What's in it for me?"
Posted by Kenton Larsen at 1:44 PM