Funny People too frustrating by half

You always knew that SCTV's great character, the ultra-sincere comedian Bobby Bittman, was about to offer some deep, philosophical musings when he started a line with, "As a comic in all seriousness..."

Funny People is the Bobby Bittman of movies: "as a comedy in all seriousness," it wants us to laugh at its jokes, but at its heart, it really wants to be appreciated as a mature and meaningful serious film.

Thankfully, the first hour of the film is so great, most people probably won't even notice how confused the film ultimately becomes, and that the tacked-on ending makes absolutely no sense, given everything that comes before.

It's been said by many reviewers that this film contains Sandler's best acting and I concur; the plot allows him to be funny and infantile, smart and serious. He also deserves much praise for parodying his real-life forays into crappy "high-concept comedies" by appearing in the films-within-the-film as an adult head on a baby's body and a "merman." Let's hope that Steve Martin and Eddie Murphy see the film for this reason alone.

So, it's ironic that Funny People itself is being marketed as a high-concept comedy with Sandler as its star. In fact, the film isn't even really about Sandler, it's about Seth Rogan, an up-and-coming comic who is thrilled when superstar Sandler catches his act and offers him a writing job.

In what turns out to be the film's big, red herring, Sandler's character discovers that he may have a terminal illness, and it changes his perspective on life.

In the first half of the film, director Judd Apatow gets everything right: the visit to the doctor's office and Sandler's reaction, the world and pecking order of the stand-up comics, and the friendship that develops between Sandler and Rogan.

There are some great laugh-out-loud moments between them, interspersed with natural, honest discussion about their imbalance of power. At this point, Funny People is about what the great Comedian documentary is about: the idea that a famous and not-so-famous comic each want what the other has. So far so good.

Jonah Hill and Jason Schwartzman deserve mention as Rogan's roommates and fellow comics; their petty politics, insults, and gossip will be familiar to anyone who has spent any time whatsoever with comics.

Schwartzman is particularly on point as the comic who lands on a crappy sitcom and rubs the others' noses in his minor success. Hmmmm....sounds like a Canadian TV personality we know, whose minor success went right to his head, where it still resides today.

Unlike most films about stand-up, the onstage comedy bits in Funny People are actually very funny, though there are much fewer than you might expect. A minor complaint is that we don't see many comics bombing; it seems that all you need to experience success in the LA comedy scene is a few ideas scribbled on paper and a mike.

Cameos abound, with Sarah Silverman's gross-out vagina impression being particularly memorable, but not as memorable as the fight that develops between Ray Romano and Eminem - maybe the film's funniest scene and greatest punch.

Second verse, worse than the first

After a great setup, however, the film has no punchline. Instead of taking the story to its logical conclusion, Apatow introduces Sandler's love interest, a former fiance. It's a fairly major downer, especially after what's come before.

What makes it worse is that the love interest is played by Leslie Mann, Apatow's wife, her on-screen kids by their off-screen kids, giving the film a creepy self-indulgence that it could've easily avoided.

Without giving anything away: the film becomes about something other than funny people entirely, Bobby Bittman at his most maudlin (Sammy!) and nonsensical. The events that unfold don't make logical or emotional sense, and the characters' motivations become murky at best, nonsensical at worst.

This part of the film, I think, is about what might have been for Sandler, had he chosen another road. What's unclear is whether the film is criticizing him for his choices or congratulating him, suggesting that he's a lost cause or a great guy, or saying that he's been redeemed or can't be redeemed. Frustrating.

The film is long, and must end sometime, so it does. I still like it on the strength of the initial premise. But, as a comic in all seriousness, oh, what might have been if Funny People had the courage of its convictions. 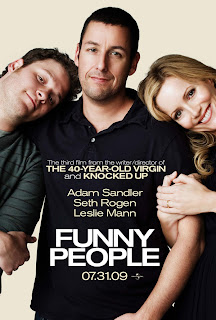