I met the back of Ted Kennedy's head once Ted's head, about to be squashed by that "I'm crushing your head" guy.
Ted Kennedy: the Lion of the Senate, a towering figure in the Democratic Party, and champion of healthcare. But to me, he'll always be and the blurry hair in the photo.

I spent some of my childhood in Boston, which means that I was legally obligated to attend any and all political rallies featuring the Kennedy family, which mostly happened around big buildings with pillars surrounded by dudes in cheap suits, as you can see: 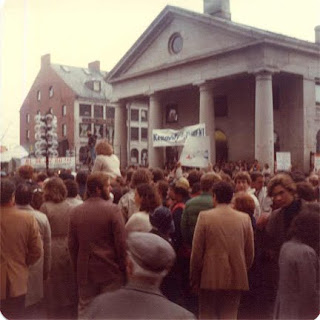 The above shots were taken with my parents' state-of-the-art camera in 1979 at a campaign stop on Ted Kennedy's ill-fated run for the U.S. presidency.

Even though he was met with enthusiastic support in Boston, it was less so everywhere else. It didn't help that he flubbed an interview with Roger Mudd where he couldn't explain what went down at Chappaquiddick, and was unable answer the deceptively simple question, "Why are you running for president?"

By the way, did I ever tell you about the time I met Jackie Onassis? We go way back, Jackie and I: 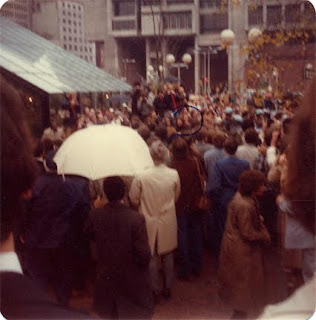 Jackie O: wherever she went, ink circled her head.
Posted by Kenton Larsen at 10:09 AM