Freep vs. OB smackdown: the media will eat itself 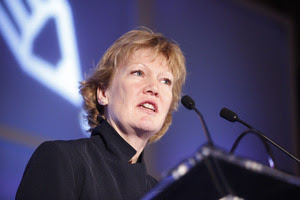 In case you missed it, Goodhand's thesis is that the Free Press does the original reporting and OB rips it off. This may be true, but it's certainly not new, nor is it limited to just CJOB.

What is new is that these intra-media grievances, which have traditionally only mattered if you worked at a media outlet, are now trotted out in public as each media outlet attempts to get its audience to consume, defend, and support it at the expense of the others. At stake is the audience and an ever-shrinking pool of local ad revenue.

(PolicyFrog has a good discussion about this issue here. ChrisD here.)

Let ye among us without sin be the first to condemn - la vie boheme!

Frankly, I was surprised that this is news outside of the Free Press newsroom. Isn't all media - the Free Press included - guilty of poaching stories from the others?

As PolicyFrog says, "Don’t tell me the Free Press has never chased down a story that had its origin in a local blog and not given any credit for it."

And has a Free Press reporter never tweeted "breaking news" that first appeared in yesterday's edition of the Winnipeg Sun without giving credit?

Why can I tell you what some of the items will be on tonight's NBC Nightly News? Because I've read yesterday's New York Times. That's what makes the Times an agenda-setting newspaper. In a way, it's a compliment! What is the Times going to do: call a cop?

Nonetheless, Goodhand says that the Free Press has launched an ad campaign "trying to explain the situation to our readers and others. We want you to know where your news is coming from."

And then what's supposed to happen?

I'm not being snarky, I actually want to know the answer, because "where my news comes from" probably doesn't matter to an audience that is used to getting it from lots of media outlets, especially younger people, who media outlets desperately need in order to have a future.

I'm in a classroom with young people every day, which means that I witness the death of traditional media every day; each year, new students have more trouble naming even a single on-air news anchor or newspaper columnist. A majority can't differentiate between Brian Williams, the anchor of the NBC Nightly News, and Brian Williams, the Canadian sportscaster, because they've never heard of either (one of my classic first-day quiz questions!).

When Globe and Mail columnist Christie Blatchford recently came to Red River College to speak to first-year students, I was surprised when some students opened their questions with, "I'm not at all familiar with your work, but..."

It's worth noting that I teach in a communications program.

"When we shift our attention from ’save newspapers’ to ’save society’, the imperative changes from ‘preserve the current institutions’ to ‘do whatever works.’ And what works today isn’t the same as what used to work." - Clay Shirky

If we've learned one thing from the Internet, it's that information is not proprietary anymore, it's part of a worldwide knowledge buffet. This means that the glory of being the one media outlet in town to get "the scoop" only lasts as long as it takes to replace it with another story. As we see on CNN every day: every news story is now a breaking news story.

So, how does a local media outlet survive? By having an online presence and network, and by being interactive and everywhere your audience needs you. I can download Globe and Mail and New York Times apps on my iPhone, but not a Free Press app. So guess which newspapers I will be reading on the bus this fall?

I think that PolicyFrog also has the right idea when he calls for a partnership between OB and the Free Press; hey, content sharing, wire services, and sponsorships are nothing new.

It wouldn't seem out of place to hear CJOB reporting on "What the Free Press is working on for tomorrow" or even having "Winnipeg Free Press breaking news." The Freep reporters could call in to CJOB to discuss the news on air, and the CJOB personalities could write editorials for the Freep, even if they're written in short sentences with typos (as radio personalities are wont to produce).

You could make the argument that what CJOB does isn't "stealing" news from the Free Press, but creating a greater appetite for local news by reporting today's headlines; if something is interesting to its listeners, they can get depth by picking up the Winnipeg Free Press. It's the natural role for both mediums.

As any restaurateur knows, the way to increase traffic to your restaurant is to be friends with the owners of all the other restaurants and work together to get people to come to your neighborhood. The worst thing you can do is put up a sign saying, "The restaurant across the street stole our recipes."

Guess what: the clientele doesn't care about your personal antagonisms, as long as the food is good. If you have a beef, talk to that person directly. If that goes nowhere, hire a lawyer. But, I'm sad to say, don't look to your audience to fight your battles for you. It won't happen.

As Clay Shirky said in this column: "society doesn't need newspapers (or radio), it needs journalism."

Something on which all media outlets can agree.
Posted by Kenton Larsen at 2:30 PM