Advertising is cheap and solves all of your problems: I Love You, Man 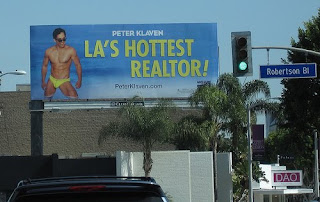 I Love Your Billboard, Man (photo from Franklin Ave.)
I finally got around to seeing I Love You, Man, which first hit theatres, oh, about the same time that Socrates was condemned to drink a decanter of hemlock.

I liked the film a lot, which doesn't surprise me, considering that it features Canadian sci-fi rockers Rush, a guy with a man-cave, and Lou Ferrigno - the Hulk himself.

Though the film doesn't strive for realism, I must point out that I've seen Rush in concert twice, met Lou Ferrigno twice, and if I don't have a man-cave, I do have a "room" with books, a drum set, CDs, action figures, a computer, and comics...wait a sec - it is a man-cave!

The thing that did surprise me is that the moral of the film is: "$8,000 worth of advertising can save your life."

In the film, Paul Rudd's character loans Jason Segal $8,000 bucks (a plot point that doesn't make a lot of sense, given what Segal says about his financial situation at the end of the film).

The loan creates a rift between the two, as personal loans often do, and Rudd decides that he no longer wants Segal to be the best man at his wedding.

Turns out that Segal has actually used the $8,000 to buy about $1 million worth of out-of-home ads in Los Angeles to promote Rudd's real-estate business ("I got a deal from a friend," is how Segal explains the disparity between the cash and the media buy. Hmmmm....).

Surprise: the advertising works and solves all of Rudd's problems: his friendship with Segal, his relationship with his family, his business, the sale of Lou Ferrigno's house, the wedding, and maybe even the marriage. Wow - neat trick.

While the film is a great ad for getting married, having a bro-mance, and seeing Rush in concert, it's even a better ad for out-of-home advertising.