I'd like to apologize for a joke of my own 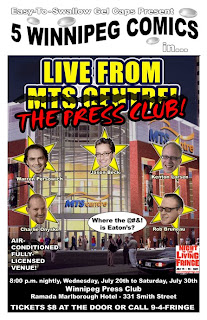 While I'm at it, I'd like to apologize for this Fringe poster from 2005.
After seeing David Letterman's many apologies to Sarah Palin, and liking the least sincere of them best of all, it occurs to me that there's a joke for which I need to apologize.

As any stand-up comic knows, you're only worth your salt if you constantly "test the limits" to find out what works. As "testing the limits" goes, Letterman's joke was pretty standard Letterman fare: combining two current events to create something altogether new, the very definition of "creativity" and "funny."

Of course, "funny" is in the eye of the beholder, which is where the trouble began; personally, I think Letterman's joke is far less deserving of an apology than Palin's insinuation that Letterman is a pedophile. One is a monologue joke about current events, the other is character assassination.

As well, Letterman mistaking the two Palin girls seems more genuine to me than Palin's assertion that Letterman's joke was about rape. That's just zany.

Now that my loyalties have been exposed, the joke for which my apology is long overdue.

The place: a bar in Gimli, Manitoba, where comedians were paid in Guinness.

"JFK Jr.’s plane went missing off the coast of Massachusetts last week. You really get the sense that his family cares about him: they sent the army, navy, airforce and marines looking for the wreckage in the ocean for three days. In my family, I’m in the bathtub for longer than six minutes, and they’re already arguing about who gets my TV."

"So, they have the entire military searching for the plane - at the cost of $50 million - three days later they find the plane wreckage, they pull it out of the water, and the next day, they have the burial - at sea. Is it just me, or do the words “eliminate the middleman” come to mind?"

I discovered what all comedians discover at some point: death is never funny. Ever. Unless, maybe, it's Osama bin Laden.

To me, this event was so far removed from my day to day existence, it was nothing but a current-events joke that I was telling. To everyone else in the room, I was making fun of a dead guy.

Then, to make matters worse, I once repeated this story at work - not as a joke, but as a story about how I bombed for telling a tasteless joke - and another woman got angry at me, even though my story was about how the original joke was inappropriate.

To the gods of all things tasteful and decent, I apologize.