Will there always be paper copies? 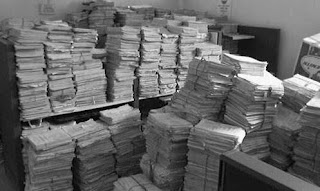 My room, circa 1985.
As time goes by, I'm finding myself less reliant on paper copies for virtually everything.

And I used to be the guy who organized my life with small stacks of papers on floors and tables, at home and at work.

"Don't move my piles!" I'd yell at whomever was nice enough to be doing the vacuuming. And, yeah, I realized even then that "piles" is synonymous with "hemorrhoids." It's just that I didn't care, because I was so worried about my piles. Of paper.

However, I've noticed that the stacks of papers have been disappearing from my life of late; sure, I'm the last guy who still reads a newspaper - because I love reading my Sunday New York Times when I'm on the bus - but I almost always refer to "electronic copies" of everything now when I need it.

Recently, Red River College lost one of my Certificate in Adult Education credits. Like a UFO that suddenly disappears from a radar screen, my "Course Implementation" credit was gone, gone, gone - though I remembered taking the class and still had all the assignments.

"Why would a guy do assignments for a class in which he was never enrolled?" I asked to my invisible and uncaring audience.

Still, the thing that solved my problem was that I was smart enough to keep an electronic copy of my official transcript. I sent it off by e-mail. Problem solved. Which brings me to the million-dollar question:

Will there always be paper?

In my five years of teaching at Red River College, one thing has changed more than anything: on my mid-semester course evaluations, students comment less on me than on my use of handouts.

"Don't use so much paper, I guess," is a common response to "What could I do to improve the class?"

1. I'm giving you handouts, because they're important. It's not a "waste of paper" if you read and keep them.

2. There's research that says that reading online is just as bad for the environment as reading paper copies.

3. When I recommend something to read online, nobody reads it. When I hand it out, they do.

All true! However, even I must admit that I see a day coming - in the very near future - when there are no paper copies of anything.

Can you really imagine a print copy of the Winnipeg Free Press in 10 years? I might've at one point, but yesterday I saw my first person ever on Winnipeg Transit reading a book using a Sony Reader.

I checked out the Reader and the Amazon Kindle when I was in Chicago and was blown away by how great they looked - like actual paper! - and the ease with which one can "turn over a page" for later retrieval, or search an entire book. Craziness!

A colleague also recently offered me a demonstration of her most prized possession in life: the Apple iPhone, complete with FREE subscription to the New York Times app. Impressive, though I don't need an "iLevel" for any purpose that I know of whatsoever.

Have you also noticed that there's no line up at the ATM anymore? Thanks to online banking, PayPal, debit and credit cards, I think the death of "paper money" is in the cards as well.

That said, I know what you're thinking: toilet paper. Yes, I suppose there will always be paper - until the iPhone solves that problem as well. IWipe, anyone?
Posted by Kenton Larsen at 4:32 PM