Marketing Bruno: subtlety is out, then 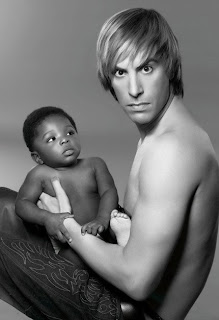 Cute + Creepy = Funny!
Meet the Queen of All Media: Bruno.

Bruno, of course, is the latest film and character from Sacha Baron Cohen, star of Borat. This time, Baron Cohen plays a flamboyant Austrian fashion reporter, whose antics, much like Borat's, disgust and shock the real people he meets along his journey.

Bringing a whole, new meaning to drip, drip, drip publicity (wah, wah), Baron Cohen/Bruno, and his team of publicists have been unstoppable in their pursuit of media impressions in advance of the film's opening on July 10.

The challenge, according to Robert Marich (interviewed here in the Wall Street Journal):

“One of the things about Borat was that it surprised everyone. The challenge here for Universal is to sustain that with Bruno, which isn’t always easy with high-concept movies because they’re not so fresh the second time around.”

1. Get them talking with a shocker

The first order of business is to get your product in people's faces. In this case, putting Bruno's butt into Eminem's face at the MTV Video Awards. Talk about "leaving a bad taste in your mouth" - am I right, people?

Eminem eventually admitted being in on the shock-marketing stunt, but by that time, buzz and awareness for the Bruno film had reached a fever pitch among the target demographic: 18 to 34 year old males, who only look away from their Xbox for something really, really gross or cool, like this.

Howard Stern, the self-proclaimed King of All Media, did almost the same thing at an MTV shindig in 1992, proving that a good idea is always a good idea.

2. A lawsuit is your friend

So, this must've come as great news:

"Richelle Olson sued the 37-year-old actor-comedian and NBC Universal on May 22, claiming an incident at a charity bingo tournament that was filmed for the upcoming "Bruno" left her disabled.

"Olson claims she was severely injured after struggling with Baron Cohen and his film crew at the event in Palmdale, Calif., two years ago. The lawsuit states she now needs a wheelchair or cane to move around."

As David Letterman will tell you: controversy and ill will sells. Milk it for all it's worth.

There's an old saying in comedy, "Buy the premise, buy the bit," which loosely means that if people are chuckling at the setup part of the joke, they'll die laughing when you get to the punchline.

In that spirit, Bruno's marketing efforts have been focused more on the character than on what happens in the film, the thinking being, "If the character makes you laugh, you'll buy into the film."

Or does the Wall Street Journal's take on it make more sense?

“How does a major Hollywood studio promote a movie so raunchy and offensive that it initially got an NC-17 rating? By staying under the radar."

I wouldn't call this "staying under the radar," but on the NC-17 issue, it might have a point: soft sell the controversial film by hard selling the cuddly - or is that oily? - character.

4. Get the media to play along.

The true genius of the film's marketing may lie here - instead of getting the media to write articles about the film as outsiders looking in, Bruno's publicity campaign positions reporters and editors as conspirators, which means that all of the resulting publicity is good publicity.

Marie Claire, for example, allowed Bruno to be the first male to ever appear on its cover, and ran a "Fashion A to Z" article ostensibly written by him - along with a bad-taste disclaimer.

Some of his advice in the article:

"A is for Austria, ze most amazing place in Europe. Ve're all proud of our country und are raised to try and achieve ze Austrian dream - find a job, get a dungeon und raise a family in it."

The GQ article also takes Bruno seriously, asking him a variety of questions ranging from the economy to Barack Obama: "It’s slightly disappointing that he needed zat beard, Michelle, to help him – but vone shtep at a time."

Even if the film's no good, find the scene that gets people talking, and run it in an ad over and over and over again. Think Terminator: Salvation, which once had a big secret, but revealed it in its ads, when it appeared that no one was going to see the film.

Bruno could do the same: Paula Abdul and Ron Paul have already gone on the record as saying they've been punked in the film - apparently Paul storms out of the room and calls Bruno "a queer." Box office gold, I tell you!

See you on the red carpet.