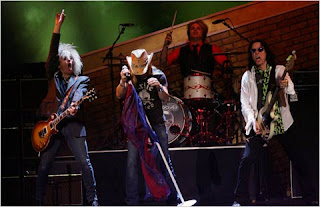 Bret Michaels, just before getting whacked in the head at the Tony Awards.
Photo by Sara Krulwich, NY Times.
Broadway is back in a big way.

First, Barack and Michelle Obama got Republicans in a tizzy when they attended the Broadway production of Joe Turner's Come and Gone, a play by the late August Wilson, who has been heralded for his many great plays that chronicle the African-American experience.

Then, tonight, the Tony Awards - perhaps the least-watched awards show on TV - put on a rough-and-tumble, fly-by-the-seat-of-your-pants show riddled with technical difficulties, but still more entertaining than it had any right to be.

Just one example: Poison lead singer Bret Michaels - singing on behalf of the musical Rock of Ages - got whacked in the head with backdrop in the opening number (see video, below).

You won't see that on the Oscars!

And Neil Patrick Harris proved that he is the spiritual successor to David Letterman, albeit gay and a better singer; his closing number was like a more cutting Billy Crystal Oscar medley, sample lyrics:

"This show could not be gayer
if Liza was named mayor
and Elton John took flight."

It's a crime that they ran credits over the number, but the New York Times reports that it got the biggest applause of the night in the press room.

I've always maintained that one of the best things in entertainment - and in life - is to go to see a Broadway play or musical in New York City, something I've been doing since I was a young lad of 18 - just a kid with another suitcase in another hall.

The first shows I ever went to see were the obvious: Cats, Les Miserables, Phantom of the Opera, Little Shop of Horrors and even the dismal rollerskating musical, Starlight Express.

That same year, I also took in some odder fare, like the great play, The Nerd, by Larry Shue, starring none other than Luke Skywalker himself, Mark Hamill, Peter Riegert, and Robert Joy, and directed by Uncle Croc, Charles Nelson Reilly.

Since then, I've gone back to New York many times, always being sure to see two or three shows while I'm there, some "mainstream," some not so much; last year, it was Jersey Boys and Spring Awakening.

Let it be said of Spring Awakening: if you've never sat in the front row of a Broadway show, and had a 12-year-old actress sit not more than a foot away from you and yell, "You're totally fucked!" in your face, you haven't lived. Sorry, but you haven't.

Tonight's Tony Awards showed what I've been reading a lot about these days: that this is the best live theatre season in New York in recent memory.

Some apparent standouts of the night:
See you in New York.