Get ready for the flood of Jackson exposés 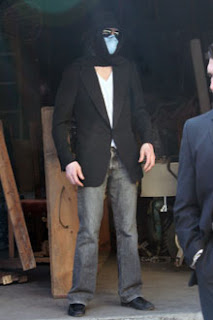 Does this guy look troubled to you?
(Photo by PEX/BuzzFoto/FilmMagic)
The body is barely cold, but you get the sense that a flood of Michael Jackson revelations is about to be set upon us.

Among reporters who attended Jackson's court appearances, there seemed to be fewer fond memories last night than among the entertainment reporters who breathlessly remembered how excited they were the first time they saw the Thriller video.

Yesterday, I wrote about how it looked like Jeffrey Toobin had been pulled from a CNN Michael Jackson roundtable for being too negative about him; he was back on CNN later in the evening and his disposition seemed to be somewhat sunnier.

Toobin covered the Jackson trials, and you could tell that he's still disturbed by what he heard - mainly because he said so; if any other person on planet Earth died amidst accusations and evidence of pedophilia, I doubt that we'd be seeing the fond recollections that seem to be making up the bulk of the stories today.

I was a kid in the early 80s, so I know what a huge star Jackson was at the time - the first African American star on the otherwise very white world of Friday Night Videos; he didn't just break into that world, but dominated it.

So, it's not surprising that people want to remember Jackson fondly - hell, he was once the Barack Obama of the music world.

However, even fans owe it to themselves to read the best Michael Jackson journalism out there: Vanity Fair's Maureen Orth wrote some of the most interesting and disturbing stories about Jackson, which mainstream media was mostly too jittery to cover.

Nonetheless, as Orth points out in today's VF post: nothing she wrote was ever challenged by Jackson or his lawyers.

"I spoke to hundreds of people who knew Jackson and, in the course of my reporting, found families who had given their sons up to him and paid dearly for it. I found people who had been asked to supply him with drugs. I even found the business manager who told me on-the-record how he had had to wire $150,000 to a voodoo chief in Mali who had 42 cows ritually sacrificed in order to put a curse on David Geffen, Steven Spielberg, and 23 others on Jackson’s enemies list. I sat through two trials and watched his bizarre behavior on the stand when he said he did not recognize his publicist of a decade."

There are too many incredible and disturbing facts in these articles to start listing them; suffice to say, read them and get ready for Orth's inevitable book, which should talk about all of the terrible things that she couldn't tell us in these articles.

The last article is probably the most disturbing of all of the stories ("Jesus juice," etc.), and also directs us to read a book that was by and large buried in North America, but may now be cleared for release: Michael Jackson Was My Lover: The Secret Journal of Jordie Chandler - written by the boy's uncle.

There are most certainly a lot of people who accepted a lot of money from Jackson over the years, who no longer have to honor the agreements in which they entered and - since they clearly love money - will likely want to make even more by writing a book, being interviewed, or whatever.

As I finish this blog, I just notice that CBS has put up this recollection of Jackson "confronting controversy" in his famous interview with Ed Bradley. Chris Rock fondly remembers the moment: