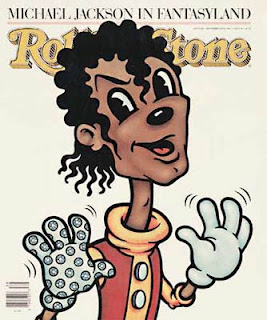 Pop goes the world!
It's interesting to see and hear the media using the term "The King of Pop" today - more often than not as the headline in articles about Michael Jackson's death.

Where do nicknames come from?

In PR class, we talk about the importance of using nicknames, labels, and symbols to catch your public's imagination, especially when you're a "showbiz impressario."

What you communicate must be clear and unequivocal. The thing we observe, read, see, or hear and that produces our impressions must be clear, not subject to several interpretations, because people tend to see things as "black or white" (thank you, MJ).

Nicknames are perfect in this regard: they're memorable, capture the public's imagination, build up "the brand" of whomever (or whatever) it is you're trying to sell, and they stick.

Bruce Springsteen is the Boss. Elvis is the King. Jerry Lee Lewis is the Killer. Frank Sinatra is the Chairman of the Board and Ol' Blue Eyes. James Brown is the Hardest Working Man in Show Business.

And Michael Jackson is the King of Pop.

Where do the nicknames come from? Some are hoisted upon the performer ("I hate bosses. I hate being called the Boss," says Springsteen), and some are coined by the performer him or herself.

That's what Michael Jackson did in 1991 - not because he was having trouble catching the imagination of his public, but because the nickname that had been hoisted upon him by the British Press - "Wacko Jacko" - was much less flattering. This was a nickname smackdown.

Rolling Stone's Michael Goldberg reported on it in January, 1992, and even revealed the exclusivity agreement that Jackson used to get the nickname used in the media, which was only too happy to roll over and play along:

(A) November 11th, 1991, memo, typed on MTV Networks letterhead...was circulated among the MTV staff the week before "Black or White" was first shown. The memo directed all on-air personnel to refer to Jackson as "the King of Pop" at least twice a week over the next two weeks. It also thanked staff members for their cooperation, adding that "Fox and BET are already doing this."

Why get the media to say you're the King of Pop when you can just tell people yourself?

What's more persuasive: hearing me say how cool I am, or hearing someone else say it? The first way comes off as conceited and calculated, the second as a disinterested third-party observation and endorsement - at least in the mind of the audience, which is where it really matters.

More disturbing now, we can agree, is seeing Macaulay Culkin with a big Michael Jackson poster in his bedroom and George Wendt ("Norm!") for a dad, who he sends to Africa. Sheesh, I think I know how this story turns out.

"Certainly, it's not far-fetched to imagine that media-savvy Michael Jackson, a star for more than twenty years, hero to both children and their grandparents, might have had an inkling that if he rubbed himself and smashed up windows, he would get a rise out of his fans."

Goldberg's 1992 article already points out the creepiness of Jackson's life - pedophilia and all - but in a completely non-actionable way, of course:

"Jackson is extremely fond of children.

"(He) frequently has children over to play. According to his personal spokesperson, Bob Jones, these regularly include "busloads" of underprivileged and terminally ill kids, as well as young personal friends of the superstar."

"When the children are here, sometimes they get so excited they just can't go to sleep," says Lee Tucker, who helped design Jackson's movie theater and serves as his projectionist."

I realize that many folks believe that Elizabeth Taylor coined "King of Pop." This may be true, but she's a Jackson insider, and this wouldn't change the thesis of this post, or Rolling Stone's original story: Jackson liked the name better than "Wacko Jacko" and manipulated the media into going along with it.