On the seventh day, the Free Press rested 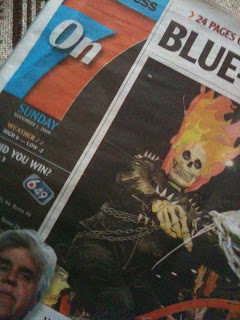 I have seen the future of journalism, and it looks a lot like the Winnipeg Sun.

I've been holding off on writing a review of On7, the Winnipeg Free Press' new Sunday tabloid aimed at drawing young people, because I wanted to give it a chance before I unleashed my blind rage at the very idea that the paper is putting its long-term investment into a paper tabloid, and not a digital product, when its target audience doesn't give a rip about the paper.

When I walked into PharmaPlus on Sunday at 8 p.m. to buy my copy of On7 - what's the rush when the news is a day old already? - I was a little worried that it might already be sold out, and I'd never get to see the first issue of the glorious Sunday experiment.

My fears instantly abated when I saw a pile of about 1,000 On7s stacked in the newspaper stand - a good sign for me, a bad sign for the tabloid, especially considering that they only expected to sell 35,000 copies in a city of 700,000 people.

The first thing you notice when you pick up On7 is that it looks and feels exactly like the Winnipeg Sun. Odd: kind of like Coke producing a beverage that tastes just like Pepsi.

Oh, that's right: Coke did produce a beverage that tastes just like Pepsi, and it was called "New Coke." It was such a smash that they discontinued it, and brought back the original Coke under the moniker "Coke Classic."

Can "Sunday Free Press classic" be far behind?

What time is it (hey buddy)?

Anyone who's been paying attention knows that:

1. In recent times, "the news" isn't the size of the story, but its timeliness - the instantaneous nature by which we can now follow (skim?) along and the idea that a "breaking" news story is one that's just been posted online or on our phones.

So, as I click on my Globe and Mail app right at this moment, I can tell you that the article called "How to protect your intellectual property" is 300 seconds old, and the one lower down called "How to buy in to Warren Buffett" is one hour old.

2. Newspapers are dying to the tune of three million papers a day (says Media Life). The ones that are surviving and thriving are ones like the Wall Street Journal, which:
3. Hyper-local is where it's at:

I'm not sure that the Free Press' days as a staple in every workplace in the city can or will ever come back; however, it's not too late for the Free Press to get young - which is to say "future" - readers by offering hyper-local content via a smartphone/online strategy.

This is what the L.A. Times is doing to survive, according to Sebastien Provencher's Praized Blog.

"The LA Times’ online strategy needs to be local as opposed to national as it will allow them to differentiate their offer versus other “national” newspapers like the New York Times. They’ve realized that local users are key to online revenues as they generate more monthly page views and twice the display revenue per page views.

"Their product approach is “we want to own Los Angeles”, i.e. be integral to life of Angelinos, be the source of news and information about Los Angeles to the world and be an information retailer by creating, aggregating and curating LA content."

What's hyper-local about On7?

Given that, what would be so wrong about the Free Press "wanting to own Winnipeg?"

Since there's no smartphone app to answer that question, let's have a look inside On7, shall we? Here's the breakdown of issue #1:
Might as well just add the Free Press Girl to the roster, and call it a day.

But it's for the kids!

So, yesterday, I asked my advertising majors what they thought of On7; at age 20 to 25, they're positioned at the sweet spot of the Free Press' desired demographic.

The ones who weren't stifling their yawns said, "What's this about the Free Press putting out a tabloid on Sunday?"

Posted by Kenton Larsen at 7:39 AM