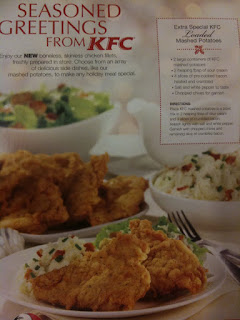 I was reading Chatelaine magazine the other day - I like to read it while I watch my stories - and came across this ad for KFC.

Why, it almost makes KFC, the maker of Chicken Bowls, and the all-meat Double Down sandwich (which helpfully replaces bread with meat to the tune of 1,200 calories), look healthy.

It's all part of KFC's Audacity of Hoplessness - I mean, "Rediscover KFC" - campaign in which KFC tries to turn around its image by promoting a healthier lifestyle that somehow still involves eating buckets and buckets of greasy chicken with your loved ones.

According to the ad and KFC website, the boneless, skinless chicken fillets are prepared in store and hand-tossed in 11 herbs and spices - a poor choice of words, perhaps, considering the recent fiasco at Domino's, where there was altogether too much in-store hand-tossing going on.

As Rob Walker once pointed out in Slate:

"In a particularly brilliant maneuver, KFC's press release suggests that you can make its chicken even more healthy by removing the skin. You have to appreciate the comedy of telling people to buy fried chicken and then toss the skin away. I only wish they'd had the guts to go further and point out that you can make your KFC bucket-meal healthier still by removing the skin, and then throwing away the chicken and preparing yourself a nice salad."