Comedy Writing students rock the house, the mic, and the improv 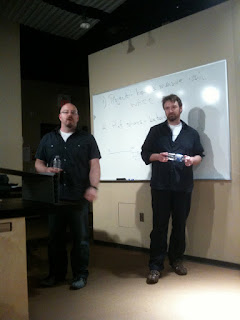 McRobb (left) and MacKenzie.
It's fun to hang out after school and make stuff up.
Big thanks to CreComm grads and ImproVision members George McRobb and Alan MacKenzie for a rip-roaring improv seminar after school today (and for my annual reminder of how terrible I am at it - thanks for confirming it, Emily. Ha!).
An equally big thanks to the always awesome second-year Comedy Writing students for having the fortitude to show up well after normal "going home time" and bringing the house down, whether it was Janet beating up Jarrett: 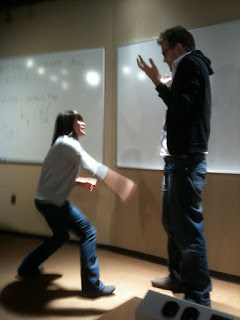 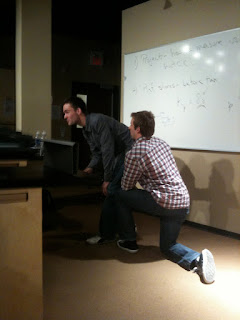 Or Thor rockin' his two turntables and a microphone before freezing at a crucial moment in his Michael Jackson impression:


Thanks for the memories, the laffs, and the images that will never stop haunting my dreams.

Alan and George will be performing in these shows in the near future: