The first byline is the deepest - baby, I know! 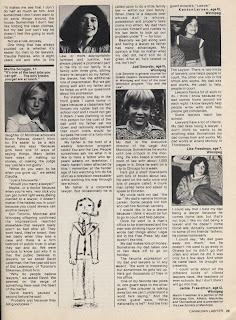 "My first byline," by Fisher Price.
One of the great rites of passage for any writer is to pen something so awesome that it actually gets printed somewhere.

I guess that may change in the not-so-distant future - death to print! - but it still has cache for now.

The first time it happens, you spend a week gazing longingly at your byline and taking calls from your family and friends, who congratulate you profusely and tell you what a great writer you are.

Grandma sticks your article on the fridge. Mom has it framed. Lamination is not out of the question. Ex-girlfriends call to let you know that they've made a horrible mistake. You let them down gently.

After that, it's all downhill. No one ever notices your byline again. The clipping eventually falls off of grandma's fridge and she doesn't even bother picking it up. Mom and dad get divorced, and no one argues over who gets your story in the picture frame. You can have it. In fact, take it.

The people who notice your writing now notice how much they don't like it, and write letters to the editor to say so. The editor prints them. People agree.

"Why did I become a writer!?" you scream over a long shot of planet Earth, and no one answers your plaintive wail.

All the more important to "sing while you're winning," as Robbie Williams once called his album, and then - to prove his point - proceeded to never record a good album or hit single ever again.

I know from personal experience that I've never been able to surpass my greatest accomplishment as a writer: at age 10, I published an article as part of a "Here's to you, dad" feature in Canadian Lawyer magazine.

Hey, that's me with all the hair and that funky Hawaiian shirt in the article at the top of this post. Yet, I've somehow managed to let my great looks get in the way of my talent. Haw, haw.

Among my witty and clever observations in the article:

2. He once went to Chicago for a week: the Winnipeg of the south.

4. I once wanted to be a lawyer to "help people." Just like Johnnie Cochran!

8. My jokes haven't gotten any better.

Also notable is that Jackie Freedman, a senior citizen at age 12, publishes an article in the same issue. In a bizarre coincidence, she and I ended up working at Assante together in the 90s. I was in the communications department and she (surprise!) was a lawyer.

No, it never got better than this article. Later on, I'd "grow up" and form a fondness for manipulating the media, writing ads that appeared in the media, and appearing in the media, but I - and everyone else - knew that it was only a shadow of my former glory as a 10-year-old writer at Canadian Lawyer Magazine.

Then again, I did come in third at Varsity View Community Centre's First Annual Spelling Bee, 1975, in grade group one and two, and still have the trophy to prove it: 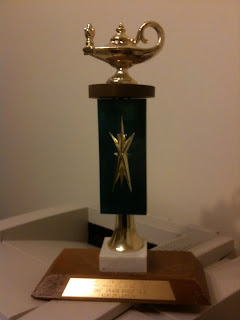 But it was only a springboard to my true passion: finding the kids who won first and second place, beating them up, and stealing their trophies.

Bylines are temporary, but vengeance is forever!

Posted by Kenton Larsen at 1:32 PM