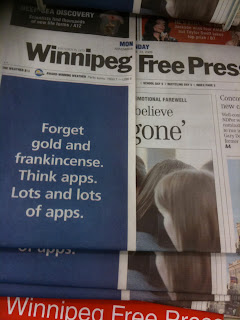 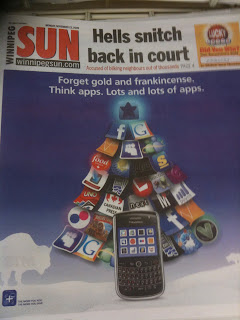 It's a great day for advertising in your hometown when the "front page" of both newspapers features the massive news that...MTS has "lots and lots of apps."

However, it's probably not as great a day for journalism.

It may be an even a worse news day when the real front page is about someone getting stabbed to death. But that would be underneath the fun flap with apps.

It was just last week that I received an email from a reader who wondered whether my anti-print comments weren't actually anti-traditional journalism.

I opened my response with this:

"I don't disdain traditional journalism; in fact, I love it and consume it with fervor everyday. I hope that journalism - especially local journalism - cannot only live, but thrive in a new-media environment.

"My fear is that it can only happen with new readers. As an ad and PR instructor, my main frustration with the state of the newspaper biz is how some of the marketing solutions aimed at "the youth market" don't harness the power of the online world, or hit the demographic where and when it consumes information."

It wasn't my intention to give the impression that I hate traditional journalism, but as a PR instructor, I know how it happened: there's only so much I can hear about journalism being "the objective truth" and PR being "spin" before I've run out of coffee to spew from my mouth in mock surprise.

My usual response: "PR is more honest about its dishonesty."

If the front page of both of our newspapers is for sale on the same day to the same advertiser, maybe it's time to ditch the notion of "objective journalism" altogether.

As I'm fond of noting, reporters didn't always aim to be "neutral observers." Says Scott Rosenberg in his excellent book, Say Everything:

"Etched into the journalism school curriculum, these values (of objectivity) were held out as timeless verities, but in fact they were of relatively recent vintage. They had been shaped by the specific business needs of the publishing and broadcasting industries.

"As they consolidated markets and sought to sell advertising that might reach vast agglomerations of consumers, the peddlers of news found they couldn’t afford to alienate partisan populations of any stripe; neutrality was a prerequisite for profits.

"Yet vibrant journalism had existed without the benefit of such values — for example, in the pamphlet culture of late seventeenth-century and eighteenth-century Britain and Colonial-era America, or in the raucous partisan newspaper competition of the late nineteenth- and early-twentieth-century urban United States. And vibrant journalism could plausibly survive their demise."

Lately, I've also been asking myself why I enjoy reading blogs written by amateurs more than reading "the real news" written by professionals.

It's tempting to quote the line often attributed to Wired's Chris Anderson, "A passionate amateur beats a bored pro," but to assume that all pro writers are bored isn't very nice.

Maybe its the inherent dispassion in traditional journalism that makes it a less vibrant ("boring?") read than the stuff by passionate people who are really riled up about something, and writing because they care about it.

So, if we free ourselves from the notion of objective journalism, and be upfront about where our biases lie, we can read exciting and passionate journalism everywhere.

Idea for the front page of tomorrow's Winnipeg Free Press: "MTS paid us a shitload of money yesterday to advertise on a flap over our front page."
Posted by Kenton Larsen at 2:15 PM