What happens to TV when we're too distracted to watch? 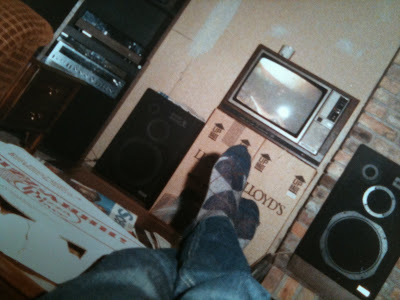 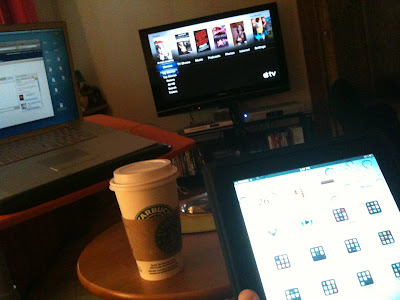 Now.
Watching TV used to be so simple.

When I was but a lad (see top photo), we had one TV with 13 channels and no remote control - not because we lost it, but because there never was one.

Meanwhile, the only distraction media to be found in the room was that box of Pizza Place pizza and smashing pair of argyle socks.

What a difference a decade or two makes.

DVRs, video on demand, streaming, laptops, iPads, video games, smartphones, the Internet in general and social media in particular have turned TV into a support medium, driving the audience more and more away from the TV and onto the Internet, in its many forms.

As AdAge's Brian Monahan recently said in this excellent article, people are turning to their smartphones and other "companion media" in droves when they watch TV, lowering their intellectual and emotional engagement with TV shows and ad content:


"Online video, with a less predictable cadence and an active user experience, does a significantly better job at holding attention. While distraction media is a threat to the value of video advertising, it also represents an opportunity to deliver a deeper companion experience to the on-screen content and ads. The consumers have the tools; it's up to the industry to give them compelling content."

I'd go one further and suggest that it won't be much longer until all of our TV networks stream all of their content on mobile devices for free at the same time they broadcast it on TV (as so many apps already do). After all, it's the audience networks that now tell the TV networks what to do, and in a mobile world, we want the flexibility to watch our content where and when we're ready to do it.

As consumption patterns continue to fragment across devices, it will be the TV content providers focusing on smart aggregation and intelligent-content networks that will ultimately rule the world by knowing what we watch and where, and allowing us to pick up where we left off on the device of our choice.

Brands (like Netflix, for example) will continue to develop their own content, merchandise, and transactions on their own branded platforms. The ultimate goal: to deliver all of the content, shopping, and advertising you want on a targeted, individual basis.

If they build it, we will watch.
Posted by Kenton Larsen at 8:18 PM