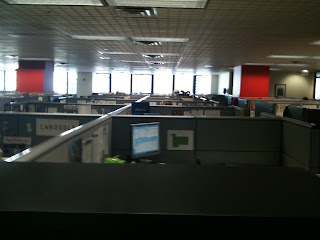 Different cubes, same idea.
I once worked in the communications department of an insurance company that rhymes with Schreat-Schmest Schmife.

Although the place has a reputation for being as conservative as the angry hyphen between its first and second name, the fact is that sometimes pants in the workplace are optional.

One fine day, my pal Lisa stopped by for a visit and I noticed that she had zipper pockets.

Without thinking, I unzipped one - and we were both startled when her pants fell down.

"What are you doing?!" we screamed at each other.

Pants back on and secured, apologies were made, lunch was bought, and we never spoke of it again.

I shared one wall of a cube (staff parlance for "cubicle") with my friend, Barb.

At the back of the cube there was a gap we could stick our heads through to talk to one another - not unlike Uncle Fester used to do on the Addams Family.

On one occasion, I stuck my head through the gap and was surprised to see Barb standing there in her ladygitch.

She didn't see me, so I retreated and said nothing for a year. At the one-year mark, after my emotional scars had almost healed, I told her (and everyone I could think of, in person and online) that I'd seen her working in her knickers.

She burst out laughing and explained that she was changing into (cycling shorts or ski pants or something) and didn't know anyone else was around.

However, I think she and I still both know she was working without pants on.
Posted by Kenton Larsen at 10:56 AM