The Idea Writers: the best new book about the future of persuasion 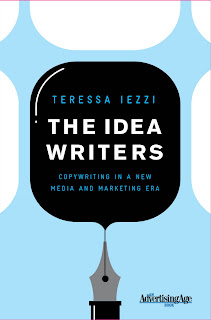 When Live the Sheen Dream wunderkind and CreComm grad Jarrett Moffatt speaks, I listen. For at least a little while anyway, until my mind inevitably wanders back to tasty, powdered donuts.

So when he told me that he'd read an awesome book about advertising, I ran all the way to the ebookstore and picked up Teresa Iezzi's the Idea Writers. I'm glad I did: it's the best book I've read about the modern advertising industry and where it's headed, and I've read Rob Walker's Buying In.

Using case studies from some recent campaigns of note - the Old Spice guy, Burger King's Subservient Chicken, and BMW films among them - the book writes the rules for the new digital landscape and explains why copywriters are not just copywriters anymore, but:
And, yeah, writing not only still matters - woo-hoo! - it's more important than ever to be able do it well.


"Your choice of phrasing and syntax needs to be that much more nimble and unusual. You need to keep people entertained and informed. You need to be authoritative, charming, funny. You need to be able to recount a story and digress in all directions."

"You should be reading all you can and writing for all you're worth. If doing that doesn't appeal to you, maybe you should pursue some other creative path."

Amen. This is probably what I already say too much in class, and what my head would probably continue to say too much, even if you cut it off with an axe:


"You need to write at a deeper and more entertaining level than everyone else. Hey, you cut my head off with an axe."

The book also makes the case that today's preferred ad team isn't the big agency model, but a pod of creatives consisting of a writer, developer, designer, and producer, who are always there for each other.

I find this idea so compelling, I'm hoping to organize next year's Advertising major this way - with help from our good friends in Graphic Design and computer programming (whatever that class is called now - me a stupid non-programmer. Grunt.).

The book also tackles the approaching sea change in which advertising becomes not an interruption, but a destination: the early version of this trend is the app, but imagine a branded-entertainment universe in which advertisers flee the traditional media to create platforms, products, and content themselves; it's easy if you try.

And since "you can't spell party without PR" (thank you CreComm grad Will Cooke), PR and social responsibility are the core assumption of every communication campaign, which aren't so much campaigns anymore, but ongoing, two-way communication models (something the book Futuretainment calls "loopworld").


"People talk about a target audience, but you also have to figure out what your target's target is. Fans talk to other fans and they're our actual target."

The Idea Writers is a fascinating book and a must-read in a world in which everyone is, for the first time, an audience and a media outlet. Read it now, before everything changes.
Posted by Kenton Larsen at 9:26 AM