Steve Jobs, my Visa, and me 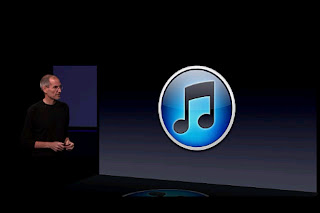 "And this is a photo of planet Earth taken from my spacecraft..."

My September credit card bill tells a gripping story about how the iPad, iPhone, and Apple TV have changed my entertainment consumption, especially over the summer: 500 Days of iPad!

In August, I went to see zero movies in the theatre, downloaded two books on Kindle, and bought 10 or 12 CDs from Amazon.co.uk, Amazon.com, and Borders in Chicago.

The rest was all iTunes all the time: movies and TV shows I downloaded on Apple TV and books and magazines I downloaded on their iPad and iPhone apps or through consolidation apps, like Zinio.

I've also started paying for apps, a slippery slope that starts at 99 cents and ends somewhere around $15.99, which is what I paid for the Chaos Rings iPhone app, based on this rave review in the New York Times, or $19.99, which I paid for the Phaidon Design Classics iPad app.

Just yesterday, I downloaded the Babies documentary on Apple TV and bought the Aug. 30 issue (the CreComm edition!) of the Winnipeg Free Press for 99 cents through the PressReader app - a handy way to organize and maintain your own digital newspaper archive.

So, this is what the bill looks like:
(For the purposes of this blog, I've left out the Star Wars figures, funky shirts, and my Franklin Mint QE II Heirloom Doll Collectibles. How I love me the QE II collectibles!).

You can see why Facebook isn't thrilled with the new iTunes 10 update, which is notable for introducing us to Ping - the new social networking part of iTunes that allows you to follow your friends and see what they've been buying on the site lately, so you can buy it too.

Facebook isn't just mad that Apple is launching its own Facebook, it's mad that Apple attempted to let its users invite their Facebook friends to join in on the fun without Facebook's permission. So Facebook defriended Apple and its relationship status changed to "single."

As iTunes dominates my entertainment dollar more and more, it's sobering to consider that there are 160 million iTunes users on the planet.

What if every one of them buys just one song a month? Or what if, like me, they don't just buy one song, but multiple apps, movies, magazines, books, and TV shows?

The memories? Priceless.
Posted by Kenton Larsen at 2:17 PM