I've got the fear of all sums


Who says a writer can't do math?

I know from what I speak, not only because I teach in the Creative Communications program, where the easiest way to turn off a class is to hand out calculators or even utter the word "math," but because my high school report cards tell a sad tale about how nature and nurture work together to predestine you to become an electrical engineer or joke writer, but never both.

I'm in good company. Why is Stephen King a bestselling author? Why, because he flunked high school math, of course. Oscar Wilde? Not Wilde about numbers. Dr. Seuss? Not a doctor of math.

In Dr. Bumford's grade 11 physics class, I looked around the room and wondered why my good friend, Jeff Carrie, could already build bridges in his sleep while I struggled to calculate the change I'd get back from $20 after buying 50 cents' worth of gum. Uh...twelve fiddy, right?

Very reminiscent of the Chris Rock math bit, where the kid says, "two plus two equals...JELL-O!"

What's the difference between 00 and 01? Who knows!

In Math 300, you'd spend your time bisecting equilateral triangles to find out how fast you'd have to pummel an object into the Earth to reach its core, assuming that its density got thicker as you went along.

In Math 301, you'd spend your time coloring triangles with the prettiest colors you could find in your box of Crayola Glow Explosions.

Needless to say, I took to Math 301 like a duck to water, coloring those triangles like they'd never been colored before. I'd get papers back, and they'd have an A+ on them. I started thinking that maybe I was not only a good mathematician but a mathematical genius, smarter than the math teacher.

"Let me carry that ruler, teach. I wouldn't want you to poke your eye out."

Awarded for my genius

The joke was on me. I knew I'd done well in Math 301, but I didn't realize I'd done so well that they'd call my name at grad as...the winner of the Math 301 award! As far as I know, it's still the only non-University level award given out at Shaftesbury High.

I shamefully walked onto the stage to get my math award while my friends laughed and clapped in the front row, knowing that my name and math being uttered in the same breath was equivalent to Mel Gibson's name being bandied about with "dignity" and "self-respect."

Which was weird, because graduated in 1985, which is ummm, like, eight years ago! 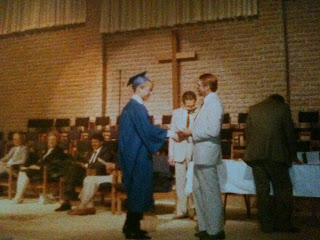 Receiving my 301 award, in front of God and everyone.
I accepted the award and gave a speech befitting of winning an Oscar when you didn't even know you were nominated. I don't remember the words, but the theme was clearly "I...am the king of the dipshits!"

Cue laughter and applause - "He's saying what we're thinking!" - but not so much as a raised eyebrow from Dr. Bumford, who knew that I was destined to go on to a life of crime, imprisonment, and the electric chair, in that order.

Speaking of, Jeff Carrie now designs electrical antennae for RIM in Ottawa - or somethin' - and now I color triangles for a living. In school. Which pays me to teach others how to color them.

Dr. Bumford would be proud.

Posted by Kenton Larsen at 6:40 AM