The Angry Birds hate our freedom 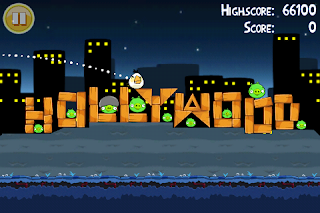 "Mommy, why are the birdies so angry?"

"Because they hate our freedom, son."

Like millions of other iPhone/iPad users, I'm addicted to the Angry Birds game.

The story: Green pigs eat the birds' eggs. This makes the birds understandably angry. So, you commandeer the birds to take revenge by launching them from a slingshot into the pigs and their dwellings, made of stone, wood, steel, and ice. Mmmm....chilled ham!

You only advance after you kill all of the pigs - the more creatively the better. Some birds dive bomb, some split into three, some blow themselves up, and some just bonk their heads against a piece of steel, fall to their deaths, and exact no damage at all.

For the low, low price of 99 cents, you get over 100 levels of mayhem with a locked level that promises even more bloodshed "coming soon."

What's not to love?

I was enjoying slaughtering the pigs - bacon for everyone! - but when I reached the city level, I realized that the game had tricked me into joining a terrorist cell of feathery suicide bombers intent on destroying the pigs' hard-fought and -won freedoms.

In this scene, you can't help but notice that I'm lobbing bombs at defenseless piggie children - Babe: Pig in the City, is that you? Is it wrong to hold them responsible for the sins of their fathers, who were only looking after the well-being of their little piggies by putting a few omelets on their plates? 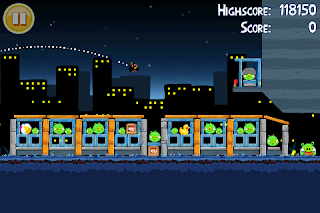 I don't know how the pigs constructed a Tower of London made out of ice, but it seems like an overreaction on the part of the birds to lob bombs at it. I mean, the pigs just took your eggs! Destroying their meticulously constructed ice tower in return is kind of like bringing a bazooka to a knife fight. 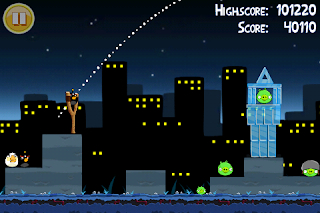 Now, I understand that the Angry Birds are talking about building a nest just blocks from the downed ice tower, making some pigs pig-biting mad. Birds say the nest will be open to everyone, pigs and birds alike, it will encourage discourse between all species, and house a daycare, theatre, track, pool, and gym.

Is it too soon for an Angry Pigs app?

Posted by Kenton Larsen at 9:53 PM