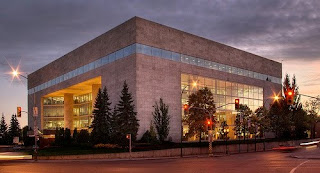 The Great-West Centre of Proofreading Excellence.
Me teach students to write good.

My whip-smart, first-year ad/PR class and I had a rollicking conversation about readin', writin', and proofreadin' today.

Translation: I got on my bully pulpit and shot my mouth off for 45 minutes about a wide range of hot-button issues spanning commas and depths of analysis to active sentences and spelling.

Along the way, I kicked the classic, boring university essay in the arse while it was down, and spun salty sea yarns about some of my favorite ad and PR clients. Names were changed to protect the innocent. Oops - that was a passive sentence!

The occasion for the discussion was the students' first assignment.

Of course, any "first assignment" needs more proofreading than you think - you're trying to feel out what this crazy new class is, understand what the blowhard at the front of the room is talking about, wondering if you can bullshit your way through it, like you did in university, and just get acclimatized to having to get up early in the morning.

And that's just the instructors. Am I right, people?

Everything I learned about proofreading, I learned working in the Communication Services department at Great-West Life.

There, we would proofread everything by printing it out twice and reading it aloud while some poor bastard - uh, "coworker!" - followed along.

Seems like a nice way to spend an hour, until you consider that we rarely spent just one hour doing it. Those insurance manuals can get pretty thick, so there were times we'd sit there for three days' straight, breaking only for lunch.

On the third day, the lancers started to resemble the platelets and the mind wandered to more interesting things - like the squirrel jumping from branch to branch outside the window. So, despite the hard proofreading work of two people over the better part of a week, you'd get the manual back from the printer and there - on the cover - you'd see a typo. Nooooooo!

You'll note that there's a dash between "Great" and "West" in the company's name.

Legend has it that the dash was a mistake on the part of the typesetter who prepared the company's legal documents; but what was done was done, so the company ran with it, and it became an important part of its graphic identity.

Flash forward 100 years. My coworker, in his first couple of weeks on the job, edited the corporate magazine for the first time and inadvertently left the dash out of the company name.

No one noticed the gaffe until the company had printed thousands of the magazines. Instead of "distributing them anyway," Great-West elected to re-insert the dashes at the cost of $60,000 - more than my friend's annual salary. Yelp!

Believe it or not: he didn't get fired.

Around the same time, another of my coworkers lived at Evergreen Towers in Osborne Village, and he could see the glowing, orange Great-West Life sign from his balcony.

Late one evening he noticed that - gasp! - the dash had gone missing from the corporate name. He called up the building's operations department and expressed his concern.

The operations department was equally concerned. So, minutes later, my friend watched from his balcony as the dash sprang to life with new life and light bulbs - a beacon of hope to lovers of proofreading and good grammar everywhere.
Posted by Kenton Larsen at 5:21 PM