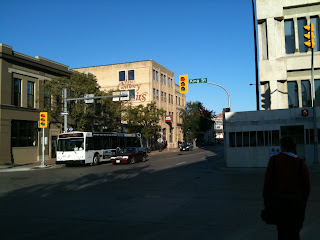 I used to chant this little ditty with my classmates in grade one, never realizing that I'd eventually have to cross the intersection of William and King on foot every day to teach at Red River College.

It's the one intersection in town where it's safer to take your chances by crossing the street against the light rather than with it, and it's located for maximum ironic impact on the south end of the Public Safety Building, the headquarters of the Winnipeg Police Service.

The intersection reminds me a little of Piccadilly Circus in London, minus all of the people, stores, and accents. Otherwise: exactly the same!

It was in Piccadilly Circus that I once almost got mowed down by 20 motorcycles racing around a blind corner at 200 miles per hour. True, I was looking in the wrong direction at the time, but I think you'll agree that it was the motorcyclists' fault for being "culturally insensitive."

If there are two things I can't stand, it's cultural insensitivity and the Brits. See what I did there? Aww, forget it.

The same thing that happened to me in England happens at the intersection of William and King - "King William!?" Told you: British conspiracy.

When the the international symbol for "walk" flashes on, the vehicles on William make a speeding left turn onto King from not one but two lanes, sending pedestrians crossing the street scrambling like the eggs in that "don't do drugs" commercial. 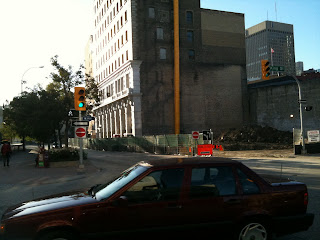 Posted by Kenton Larsen at 8:47 PM