"Take me, hurt me, smoke me:" Newport

Newport: there's a fine line between lover and hostage.
Is this a good ad or a bad ad? Or can we just agree that it's a perverted ad?

Another year, another Good Ad/Bad Ad assignment in which students find two magazine ads, a good one and a bad one, and write about what makes them that way.

The assignment has been a mainstay in Creative Communications for over 20 years, not only because it makes for a great icebreaker at the beginning of the year, but because it reveals the subjective nature of advertising, art, and everything.

But if one thing holds true every year, it's that one person will present the famous "Alive with Pleasure" lifestyle ads for Newport cigarettes, a campaign that started in the mid-70s and continues to this day.

Every year, seeing another of these ads makes me think of John Leo's 1988 article in (the now defunct) Spy Magazine, which chronicled and critiqued the fun - or is that mayhem? - going on in the campaign.

I finally tracked down the article, thanks to Spy releasing an awesome history/anthology called The Funny Years. There on pages 63 and 64 is Leo's famous advertising case study (click photos to enlarge). 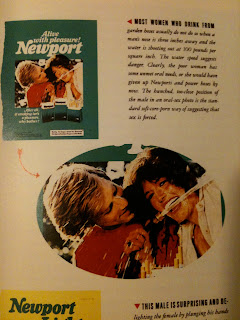 Take off, you hoser.
Says Leo:

"Why are the ads so successful? Post-feminist resentment.

"About half of the photos depict women who seem to be off-balance or menaced, or at least the target of berserk male energy.

"Newport women tend to suck on icicles, drink from hoses whenever they can, and open their mouths as tiny white snowflakes, water spray or feathers drift their way."

And don't get me started on the gumballs! 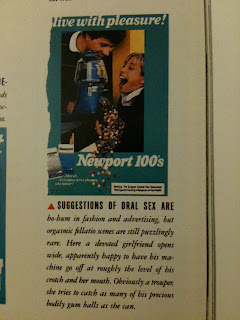 "In Newport's sexual wars, men get pushed around, too. During a miniature golf game, a giggling woman tees up her ball on the mouth of a supine male."

And what could this "odd phallic demibranch" mean? 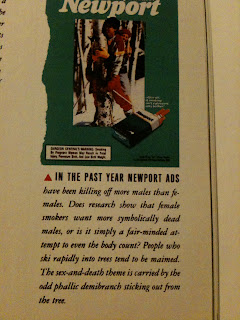 Is that you, honey?
And what guy doesn't like to spend a lazy, Sunday afternoon getting stomped on his privates? 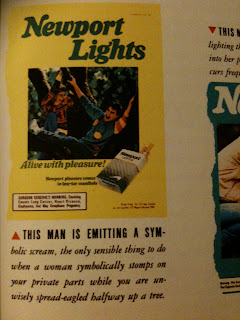 Newport presents: the Nutcracker.
In the article's close, Leo tracks down the guy who took the photos for Newport, and it turns out to be none other than Joel Meyerowitz, the famous street photographer.

Meyerowitz has since gone on to publishing a photo archive of the Sept. 11 attack on the World Trade Center, as the only photographer allowed onto the scene at Ground Zero immediately following the attack.

"(Meyerowitz) seemed more embarrassed about being caught doing commercial work than about being tagged as the perpetrator of softcore sex and violence...(he) implied that the campaign had been intended solely to depict rollicking, wholesome activities of fun-loving couples."

And what, I ask you, could be more wholesome than a good, old-fashioned pumpkin plunge? 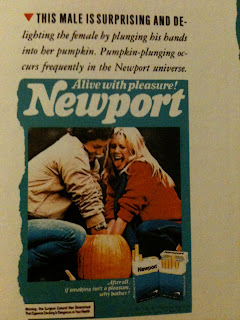