Classroom size: the less the merrier! 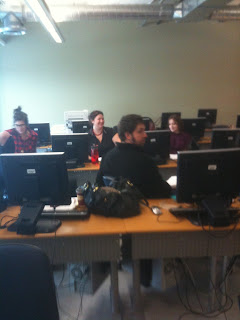 The perfect class: four students, 40 computers, one teacher with camera.
I remember the first time I walked into my philosophy of ethics class at the U of M.

I was taken aback when I realized that the class was actually just a teacher and four, nerdy losers sitting around a small, boardroom table - and I was one of them!

I felt like the guy who pays good money to see a "movie" at the Towne Cinema, only to find that his TV is actually bigger than the screen in theatre #3: "Money back, please!"

I was especially piqued, because I was just 19 and used to treating my larger classes like spectator sports. I'd chuckle at the professors' jokes (Nielsen: "I would give my eyetooth to be svelte!"), but I didn't feel that I had anything to contribute, so I didn't.

Hell, just a couple of years earlier, I was delivering newspapers for a living - so what useful experience did I have to bring to the table?

In the larger classes, there were some students who clearly considered the classroom to be a giant soapbox for their views on pretty much everything. They'd speak, the rest of us would roll our eyes, rinse, wash, repeat.

Some days, I didn't feel like listening to the same people say the same things, so I didn't go to class. Nobody noticed, as far as I knew. They probably didn't.

Talk or the sheriff gets it

But in my tiny philosophy class, we'd go around the table and talk until everyone had a chance to share. I was forced - at gunpoint, I tell you! - to attend class and have opinions, or at least pretend to have them.

It was good for me.

My first outwardly expressed thought in the class came up during a discussion about the ethics of animal testing: "Who's to say that an animal's sense perception is worth less than a human being's ability to think about thinking?" I asked, surprising even myself.

"Does anyone know what he's talking about?" asked the professor to the other three geeks, giving me props for saying something smart. Who knew I had it in me?

I heard a bell ring, and Clarence got his wings.

How many students is the right number?

I sometimes think about this experience when I teach my classes. At any one time, each Red River College instructor has around 100 students on his or her watch. In general, each class consists of about 25 students.

Is there enough time to give everyone a chance to speak or the one-on-one attention they all deserve? "I wish!" I thought, as I remembered the poor student who waited 25 minutes to see me earlier this week. Ugh.

There have already been some amazing discussions in this year's larger classes, but I've noticed that we do have some "phantom students" in the room. In Friday's class, I saw one of them checking messages on a cell phone.

I didn't say anything, because there's nothing like ending the week on a big downer. But I wondered whether this would happen in a smaller class. Probably not.

But I think that this rule holds true: the smaller the class = the greater the engagement, and feeling of responsibility, on the part of its participants.

This year I've got 16 students in the advertising major. The cool thing about having numbers in the mid-to-high teens is that the classroom becomes a boardroom, not unlike my philosophy class.

Last week, the majors and I made mood boards together - the perfect exercise for a class this size (it would have been even more perfect if I wouldn't have accidentally whacked a student in the face with a mood board. Thanks for not suing me!).

In a class of 16, there's nowhere to hide or sink into the background. So, swim it is!

In my experience, a smaller class size - or number of students per instructor - leads to a greater depth of sharing, creating, learning, collaboration, exploration, inquiry, demonstration, passion, reflection, discussion, and opinion formation.

When you consider that all of the information you could ever want is available online, the idea that school is a spectator sport, where an instructor provides a one-way flow of information to his or her "public" is a joke.

Which reminds me of the stand-up bit I used to do about my university education:


"I was a terrible philosophy student. On the first test, I proved I didn't exist. Then for the rest of the year, I did f-all."

It's not funny, because it's true.
Posted by Kenton Larsen at 3:07 PM