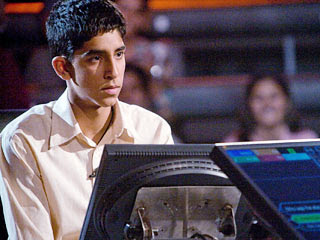 Another year, another "Oscar the Grouch" headline in the Winnipeg Free Press, along with the other 10,000 pages that come up when you Google "oscar the grouch nominations." Confession: I used the same headline 100 years ago when I was entertainment editor of the Projector - and, yes, it was a cliche then too.

I used to also have a big Oscar apartment party every year; I won the pool every year, except the last one, at which time I canceled all future parties - in the same spirit of "It's my ball, and if I can't win, then I'm going to take it home. Nyeah, nyeah."

One year, I also won Movie Village's Oscar contest, and got a free rental every day for a year. Well, that was the prize, but I only ever cashed in about 10 of them. It was bad enough that the people working there called me "the Movie Village Guy."

The other problem I had with Milk is that it seems like a gay-liberation movie for people who don't know that gay people have been liberated. I can imagine my grandmother watching the film, and congratulating herself at the end for supporting gay rights.

That said, the Wrestler and Slumdog rule. And it was nice to see that Danny Boyle snuck in his signature scene, which he pioneered in Trainspotting: the dirty toilet that our hero must fall into in order to a) gross us out, b) make us laugh, and c) advance the story. More dirty toilets, Danny. More!

So, let's see how I do with my Oscar picks this year. If I get more than half, next year the party's back on!

Musical score
Slumdog Millionaire - for the musical number at the end alone.

Song
Jai Ho, Slumdog Millionaire, for the same reason as above.

And to Hell with the documentary and animated shorts. They're the deciding categories in every year's Oscar pool, because no one has seen them, or ever will. Yes, I'm bitter.

Enjoy the show!
Posted by Kenton Larsen at 10:05 AM