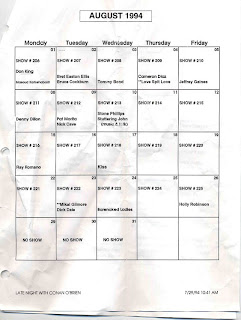 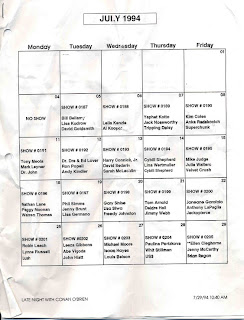 In the early days of Conan O'Brien, the guests left something to be desired.

No, Late Night with Conan O'Brien was not exactly an A-list affair in the first season. Fresh after David Letterman left the show to much critical acclaim, I remember watching Conan and wondering, "Why doesn't Conan have Bruce Springsteen, Tom Hanks, or Harrison Ford on his show?"

When I started working there, I discovered the answer: because real celebrities don't do shows that no one watches. Even when Max Weinberg is said celebrity's drummer. Ouch.

So, when you look at these planning calendars from my first two months on the show, you see a lot of folks who would do the show: Abe Vigoda, Leeza Gibbons, Lynne Russell (hey, that was before she was bashing the CBC!), Ron Popeil, etc.

So, it wasn't much of a stretch to get really excited when Cybill Shepherd showed up, or Michael Moore, or Nick Cave and the Bad Seeds, or Tom Arnold, or - to a Homicide: Life on the Street fan - one Yaphet Kotto.

I also remember a fateful night at the Fiddler's Green - a little Irish bar next to 30 Rock - where we celebrated Andy Richter's birthday.

I sat next to a sardonic brunette, who charmed me with her sarcastic one-liners and droll take on the celebration. After we staggered out of the bar, my fellow researcher, the equally sardonic Betsy Boyd, said: "You were really charming that Janeane Garofalo." "Who?" I asked.

Yeah, I suck. As a researcher and a dude.

It also makes me angry to see that I didn't take advantage of meeting some folks who weren't big then, but who have since elevated to star status, at least in my mind.

David Sedaris? Don't remember him, but there he is on the calendar. Freedy Johnston? Nope, no recollection. Tripping Daisy? It took the Polyphonic Spree to make me appreciate them. Andy Kindler? I saw him do stand-up in Minneapolis, having no recollection that I'd ever been within earshot of him.

It kind of reminds me of the time I went for lunch with my dad in New York, and found out later - when looking at photos - that Daniel Day Lewis was sitting at the next table.