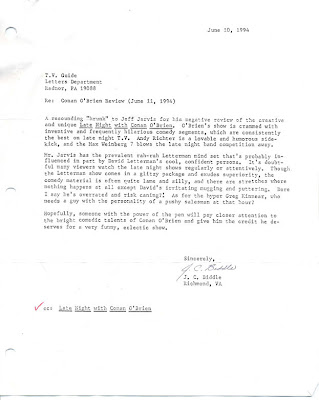 Letter from a Conan fan. Click to enlarge.
For every critic who bashed Conan O'Brien, there was a letter from a fan who begged to differ. In the early days of the show, it was these fans who kept the show - and O'Brien himself - going.

It may be tough to believe now, but the critics were merciless when O'Brien first appeared on the scene; Letterman was the critical darling, and the NBC gang looked like a bunch of idiots for going with an unknown whose lack of on-air experience made him, as the Washington Post's Tom Shales said at the time:

"A living collage of annoying nervous habits. He giggles and titters, jiggles about and fiddles with his cuffs. He has dark, beady little eyes like a rabbit. He's one of the whitest white men ever."

The rest of the article is just as savage, and ends with a knockout punch:

"On his own CNBC cable talk show Monday night, (Tom) Snyder graciously congratulated O'Brien and plugged the show. One can look back longingly to the time when Snyder kept weary viewers awake with engaging talk from a wide variety of guests - no band, no monologue and very little phony show biz shtick. Snyder is a born broadcaster who can't seem to help but be fascinating on the air. Conan O'Brien is the precise opposite of that."

Even the positive press at the time was bad. Check out this New York Times article from September, 1994: They said it couldn't be done: Conan lives!

The Times article quotes Jeff Jarvis of TV Guide, who called O'Brien "a twitching frat boy who thinks he's much cuter and funnier than he actually is." Says the Times: "In June, Mr. Jarvis amended his opinion: "I have mellowed on the guy. These days he merely bores me"."

Each day at Late Night, they circulated a traveling file containing clippings from the previous day's newspapers and magazines, and an assortment of fan letters. The letters were so entertaining and heartfelt that I started making photocopies and keeping my own file; I figured that I'd want to come back to them again, and I have done so over the years.

Remember, this was just before e-mail became the preferred method of communication, so these letters may now represent the very last of their kind, which is too bad: there's something really great about the typography and obvious work that went into the above "Jeff Jarvis protest letter," from J.C. Biddle in Richmond, VA.

I mean, Biddle took the trouble to type out the letter on a typewriter, send it by snail mail to TV Guide and cc'd Late Night. Would anyone have time - or take the time - to do this anymore?

Biddle's letter is very typical of the fan letters that used to come in to the show. They all pretty much followed this storyline:

While letters like this may seem crudely assembled by today's standards, these things really had an impact around the office and at NBC. The thinking: if this show inspires this kind of fan interaction, there must be something worthwhile about it.

Were it not for these fan letters - and the fact that Greg Kinnear, Dana Carvey, and Garry Shandling didn't want the job - Conan may not be getting the Tonight Show job today.

Would someone please fly out J.C. Biddle to Burbank for Conan's first night hosting the Tonight Show?
Posted by Kenton Larsen at 5:46 PM