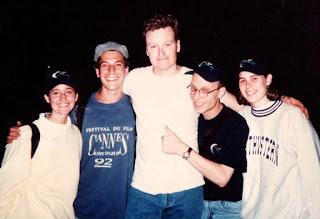 Team Conan: that's me giving the big man a poke in the ribs.
And, yes, he's as large and powerful a man as I'm diminutive and cuddly.
As any Late Night fan knows, this is Conan O'Brien's last week on Late Night.

Having worked for Conan as a researcher his first year on the air, it's kind of cool to see how far the man has come.

On assignment for the Winnipeg Free Press, I wrote the following story, which Morley Walker was nice enough to run on the front page of the Entertainment section on Saturday, Aug. 31, 1994.

As you can tell by the tone of the article, Conan as a TV entity did not seem long for this world. Working on the show, I met then-NBC President Bob Wright's daughter, Maggie, a very nice person who dished me the dirt on what was transpiring behind the scenes.

Another of her stories sticks with me:

"They've offered Conan's job to Greg Kinnear," she told me one day. "If Greg Kinnear takes the job, Conan will be fired, along with all the staff." Yes, that's how close Conan came to losing his job in the first year.

And even after that year, NBC renewed his contract in three-month periods: an embarrassment to anyone at that level of the business.

So, on the eve of his taking over the Tonight Show, here's how I saw the situation 15 years ago (enjoy the idealism and the stories from a society on the verge of the Internet):

Red River grad finds working in late-night TV not all fun, glamor
By Kenton Larsen, Special to the Free Press

Dressed casually in a white T-shirt and jeans, the host of NBC's Late Night stares into the monitor, yawns, and rubs his red eyes.

As a newcomer to the show, I wonder if O'Brien will make it through the rehearsal without falling asleep; the strain of hosting a late-night talk show five days a week is showing on his face.

He finally lowers his head onto his desk and moans.

Somehow, my job working as a researcher on the show isn't quite as funny as I'd expected.

Granted, it may be due to my being a showbiz novice, having just graduated from Red River College last June.

Or maybe I've been unduly influenced by watching the Dick Van Dyke show as a kid. But I thought TV variety shows required their employees to be endlessly witty, at work as well as home.

Perhaps it's the barrage of bad reviews that have pegged O'Brien's Late Night as unprofessional and aimless, and the persistent rumors of impending cancellation.

These rumors have become a fact of life around the office, adding to the poor morale that comes with guests cancelling at the last minute to do David Letterman's Late Show, and segments that have to be axed because they don't get laughs. Garry Shandling's talk show satire, the Larry Sanders Show, hits too close to home.

And to make matters worse, I soon realize that my dream of hanging out with Conan in the off-hours just isn't going to happen.

In the ninth-floor offices of 30 Rockefeller Plaza in midtown Manhattan, O'Brien is rarely seen. He almost never enters the offices through the main lobby, and his discussions with anyone not a producer are infrequent.

Every so often, I see O'Brien getting a drink from the staff's small fridge, but the matters of the day are left to his assistant/girlfriend Lynn Kaplan, who also carries the pained facial expression that comes from being under a lot of pressure.

From the moment I step into the offices, I sense there's an underlying, unwritten rule: don't speak to Conan unless he speaks to you first.

However, not long after I begin working on the show, I board an elevator, only to find myself alone with the man himself.

"Where are you from?"

"We have lots of fans up there," he says cryptically, before getting off the elevator.

That accidental conversation, as one person on the show tells me, is practically a relationship compared to the interaction most employees have with the self-professed star of the show.

How I got the job

Unfortunately, he never asked me how I got the job, which might be best described as dumb luck.

Sensing my job prospects in Winnipeg were non-existent, I mailed out my resumes to 10 of my favorite TV shows, on the off-chance that one of them might cheer wildly at the prospect at having a Winnipegger around to make fun of.

Out of the 10 shows, only O'Brien's and PBS's Frontline in Boston contacted me. After a quick flight down to New York for an interview, I found out the job was mine.

I quickly discovered that the title "researcher" encompassed much more than I originally thought. Once it meant running all over town looking for a poster of Frank Zappa sitting on a toilet.

Another time it meant tracking down a Barbie-like doll modeled after cover-girl Beverly Johnson. In both cases, the fruits of my labor went unused on the final show.

Sometimes, little scraps of knowledge came in handy. Once, I learned that Canadian comedian/Kid in the Hall Scott Thompson was going to be on the show, and I remembered reading his account of meeting Imelda Marcos in Saturday Night magazine. One hour later, he was telling the story to Conan on the show. It felt good knowing that it would've never happened without my intervention.

Pardo, best known for being the announcer on Saturday Night Live, is especially willing to engage in conversation with anyone unlucky to make eye contact.

"That salad looks great," he says to me on the elevator one day, launching into one of his tedious, trademark showbiz stories. "When I first got started in the business..." Trapped!

If working on Late Night is lacking in the laughs department, it makes up for it with the "we've got a show to put on, and everything's going wrong" excitement that arrives daily, about one hour before show time.

Outside studio 6A, makeup artists work feverishly on guests, O'Brien's band, the Max Weinberg Seven, tunes up, last-minute script changes are rushed to the control room, and the 200 people who make up the studio audience are escorted to their seats.

That's inevitably when the last-minute glitches fire up.

On one occasion, Academy Award-winner F. Murray Abraham walks out on the show when he finds out the sketch in which he's scheduled to appear is bumped to the last, and least-watched, place on the show.

And recently, boxing promoter Don King showed up late, forcing the audience members, who are not allowed to leave their seats once in the studio, to listen to Louis C.K., one of the show's writers, do a lame stand-up comedy routine for half an hour. After running out of jokes, C.K. finally breaks down and sings an off-key rendition of the Kinks' "You Really Got Me," further befuddling the crowd.

During the show's taping, a number of O'Brien's staff gathers around a close-circuit TV. When O'Brien flubs the delivery of a joke, they roll their eyes and sigh with exasperation.

In the control room, producer Jeff Ross is not as subtle. In addition to rolling his eyes, Ross has been known to shout at O'Brien's image on the screen, bang his head against a wall, and feign death.

On one show, editors had to perform surgery on SNL castmember Ellen Cleghorne's segment, after she repeatedly defamed Jamie Lee Curtis, in addition to much of O'Brien's interview with Jenny McCarthy, Playboy's Playmate of the Year.

McCarthy sweated so profusely, editors had to take out any shots that included her armpit.

Despite these complications, the show always comes off, which is testimony to the staff, mostly made up of showbiz amateurs.

Their greenness is also responsible for the show's wildly experimental comedy, which ranges from funny to bizarre.

"There's a certain freedom when you're working on a show that no one watches," explains Late Night writer Marsh McCall to me one day, only half joking.

Perhaps the best thing about working on Late Night, as these anecdotes prove, is that it's a good reality check for anyone, like myself, who has ever romanticized show business.

When you get right down to it, it's only a job, and its employees are people with the same problems as all of us, their offices plagued with with the same personality conflicts and gossip you might find in any office.

When I'm back in Winnipeg, I'll have endless stories about the ridiculousness of show business and some super-cool memories of New York.

O'Brien and his staff, on the other hand, will still have to continue grinding out a show under the spectre of cancellation and poor reviews.

Posted by Kenton Larsen at 4:17 PM