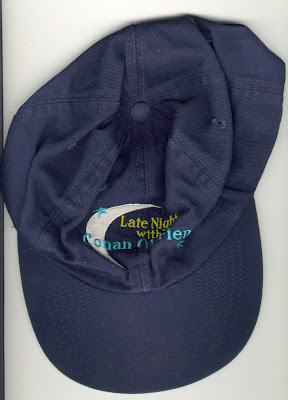 Can I sell this on eBay now?
Last night, Conan said his last goodbye to Late Night. It was a strangely unemotional affair, especially in comparison to Letterman's farewell on the same show 16 years earlier.

As expected, good sport and former O'Brien sidekick Andy Richter showed up, looking a little worse for wear with a strange combover. Still, it was good to see the two guys ham it up together, just like they did in the old days.

Conan also released Abe Vigoda back into the wild. It was good to see Abe again; especially if you're like me, and you thought Vigoda died years ago.

The White Stripes also showed up, and did a terrible rendition of "We're Going to Be Friends," which it looked like Conan had requested specifically for his last show.

We got some decent best-of clips, but nothing really came close to David Letterman's emotional and hilarious farewell to Late Night back in 1993; I mean, sheesh, even Letterman got Springsteen to play his last show...a true spine-tingling moment in late-night TV, if there ever was one. As one talkbacker says on the YouTube clip:

"Something magical happens in this video, and you have to look to see it when the Letterman band transitions from routine to unscripted ecstasy."

Letterman also got a tour de force interview performance from Tom Hanks on his last show - just before Hanks lost the sarcasm and became "respectable." Be sure to watch parts 1 and 2 of the interview...Hanks' Cher jokes in part two are classic.

The closest Conan came to that was his closing goodbye, in which he thanked everyone on planet Earth who had helped him become the man he is today: an unintentional precursor to tomorrow's Oscars!

It was good to hear him give a shout-out to former writer Marsh McCall, or as I think of him, "The one writer who was nice to me" when I worked on the show.

The closest Conan's show came to genuine emotion was when he thanked Letterman for “inventing this late-night show” and being “one of the most brilliant broadcasters certainly of the last century and this century and for all of time.”

“Living in his (Letterman's) shadow has been a burden and an inspiration for me for years,” said O'Brien.

O'Brien thanked Leno next, but his more carefully selected words seemed to damn Leno with faint praise. "I owe that man a great deal," said O'Brien. It reminded me of Bill Clinton's famous "that woman" disavowal.

O'Brien also had warm words for Lorne Michaels, and - maybe I'm crazy - but I believe Conan did NOT wish luck to his replacement, Jimmy Fallon: perhaps the least-anticipated host of a late-night show ever (and remember: Chevy Chase and Pat Sajak had late-night talk shows).

So, if O'Brien is no Letterman, and Fallon is no O'Brien, we can look forward to a Carson Daly-helmed Late Night in 16 years. Wah, wah, wah.

Our friend, Aaron Barnhart, at TV Barn has a very interesting take on the upcoming Late Night Wars here.
Posted by Kenton Larsen at 1:06 PM