Can you find the guy on steroids in this picture? 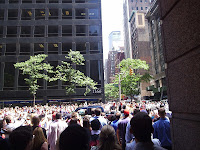 I'm not much of a sports fan, but last year I happened to be in New York during the Major League Baseball All-Star Game.

I caught the parade with some pretty pumped New Yorkers, including a young woman who yelled and screamed until each baseball player looked at her and waved; then, she'd turn to her friends and say, "Who was that?" Great stuff.

So, then comes Alex Rodriguez in his flatbed truck, fresh off of his Madonna affair that busted up her marriage and his, and - surprise - everyone just cheered for the guy, so beloved is A-Rod in his hometown.

So, you know they're hurting in New York today on the news that A-Rod tested positive for steroid use in 2003, while he was playing shortstop for the Texas Rangers (something which he's always denied).

Now he's getting paid $275 million over 10 years to play for the Yankees and - kaboom - his brand is shot.

I wonder how he'll be greeted on the field this spring or at the next All-Star parade? "A-Fraud," anyone? I guess it still beats: "Who was that?"
Posted by Kenton Larsen at 12:30 PM