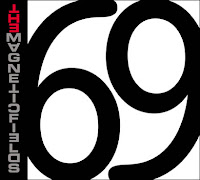 The Magnetic Fields' 1999 release, 69 Love Songs, will make your Valentine's Day, especially if you're spending it alone with a sawed-off shotgun and a bottle of scotch (Glug-glug, bang-bang!).

While the Magnetic Fields have always been a good band, and lead singer Stephin Merritt has always been an intriguing songwriter, nothing that they ever recorded before this release even hinted that they had this kind of ambition in them:

Sixty-nine songs over three CDs, running the gamut from showtunes ("The Luckiest Guy on the Lower East Side"), jazz ("Love is Like Jazz"), Irving Berlin ("A Pretty Girl is Like...") to new wave ("Promises of Eternity"), country ("Sweet-Lovin' Man"; "Papa Was a Rodeo"; "Kiss Me Like You Mean it"), Gilbert and Sullivan ("For We Are the King of the Boudoir") and even numbskull punk rock ("Punk Love").

But 69 Love Songs is no mere novelty record; these songs are smart, witty, and tuneful. Lesser artists would kill for just one of Merritt's songs, of which "Acoustic Guitar", "I Don't Believe in the Sun", "The Book of Love", "Busby Berkeley Dreams", "The Way You Say Good-Night", "All My Little Words" and "Papa Was a Rodeo" are the standouts.

Typical lyrics, these from "Acoustic Guitar:"

Acoustic guitar, if you think I play hard
You could've belonged to Steve Earle
Or Charo or GWAR
I could sell you tomorrow
So bring me back my girl

Bonus points for namechecking Steve Earle, Charo, and GWAR! in the same song.

Merritt wrote these songs inspired by Stephen Sondheim and envisioned them being performed as a cabaret.

Sure, some of this stuff is campy, but that's part of what makes this collection so great - Merritt doesn't take himself, or it, too seriously. Great advice for any Valentine.

Posted by Kenton Larsen at 9:10 PM