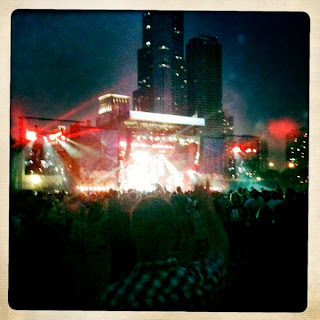 Find Muse in this photo.
After last year's oversold Lollapalooza fiasco, I vowed to never go back.

Long story short: I went back.

The pull for me this year was the Big Audio Dynamite reunion - fronted by the Clash's Mick Jones - enough for me to get down off my high horse, put last year's bad vibes behind me, and take the 20th anniversary of the iconic music festival for another spin.

Organized by Perry Farrell of Jane's Addiction, this is the fourth time I've attended the festival, and the third in Chicago's Grant Park, where it now makes its home.

1. Coldplay vs. Muse
There are always great bands at Lollapalooza. The issue is that they always play at the same time.

This year's battle of the titans was Coldplay versus Muse. Unlike the bulk of the crowd, I chose Muse and was happy I did - they're my pick for the best performance of the festival. I now can say with certitude that those are not my underpants (Weiner jokes never get old) and I know exactly what it would be like if Queen and Rush jammed on Mars.

Muse frontman Matt Bellamy gave Coldplay a dig during the set: "Thank you for coming to see us. We realize you had options. You chose the right one."

2. Eminem vs. Beirut vs. My Morning Jacket vs. Pretty Lights
In a bout of counter-programming diarrhea, these four bands played at the same time.

I walked back and forth between Eminem and Beirut; I was about a mile back from Eminem, but I saw him play "Stan" and sing with Bruno Mars and Skylar Gray, so it's all good, girlfriend.

Pity poor Beirut: he has some great tunes that would captivate any audience in a fancy theatre on a Friday night. On an outdoor stage, sandwiched between Eminem and My Morning Jacket? Good luck, tiny man with a tiny band.

Like last year, overlapping sound was a big problem at this year's fest. Let it be said that Beirut is not best enjoyed with indie jam rock blaring in one year and white-boy rap booming in the other.

In this corner: Cee lo green's setful o' awkward pauses and technical problems - and the man pulled the plug with time to spare. The T-shirts that say, "Cee Lo says, Fuck You" may have hit a little too close to the mark.

The winner for worst band: Cee Lo, thanks to OK Go's big save on the last song, "This Too Will Pass." Still: based on what came before, that song has to be a fluke. And no Rube Goldberg cameo?

Despite more fencing and a three-level security check on the way in - wristband check, frisking station, and electronic scanner - gatecrashing remains a problem. One middle-aged woman told me she paid a security guard $20 to "use the restroom." Yet, she'd somehow found her way to the Eminem show. Go figure.

Overall, crowd flow seemed a bit better this year, with food and merch moving to Columbus Drive - the main thoroughfare - and the addition of more picnic tables at which to sit and moan about sore feet.

Note in the photo below - the massive crowd that starts at the festival gate and goes on along Columbus Drive forever: 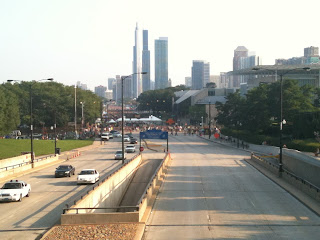 5. Eminem fans not so BAD

The BAD reunion was my raison d'etre, but I didn't expect the massive crowd I found awaiting the band's performance.

Upon closer inspection, many of them looked suspiciously like Eminem fans. Turns out that Eminem fans are clinically insane: the die-hards stood and waited at the Music Unlimited Stage for upward of eight hours in 35-degree heat, though Fitz and the Tantrums, BAD, and Cee Lo.

Eminem fans also win the prize for being the nicest ever: the young guys at the front of the stage gladly let us stand up front for BAD's performance and only made fun of Mick Jone's British accent a couple of times ("fank you!").

A big thanks to the very nice, young men who restored my faith in a generation I thought to be mostly made up of rioters and hooligans.

I do, but I like pina colada smoothies even more. Nicely done, food services.

And they will take you down in their desire to get to the stage to see her.

I was so excited to see BAD, I had trouble remembering the songs when the band was finished playing. That's why I had to drive to Minneapolis the next day to see them again.

1. A guy barfs up beer, takes another swig from the beer bottle, passes pukey beer bottle to girlfriend, she takes a swig too.

2. America makes a drunken, late-night phone call to China to ask for help with the debt ceiling. 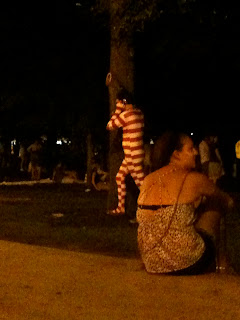 3. A woman asks me when BAD is playing right after the band finishes playing on the stage right in front of her.

4. A guy barfs up beer on the ground, people show up to watch the next band, sit down in the barf.

11. Worth the price of admission alone

The Chicago skyline at night. 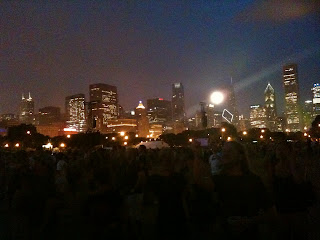 A toss-up: the Google+ tent with Google+ fans blowing on my Google+ bald head, the Lollapalooza Instagram contest, or the Toyota "made you get in our car" tent: 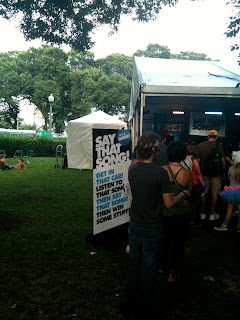 "The Irish should never really stand in the sun. And I'm a ginger, so it's even worse." - Alex Trimble, Two Door Cinema Club 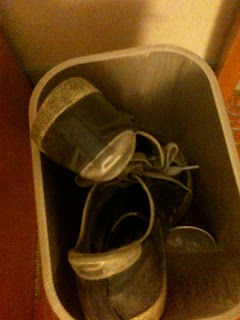 That's it: I'm never ever going back again. Then again: if XTC were to get back together...
Posted by Kenton Larsen at 11:42 AM