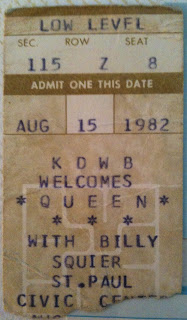 Sophie had it easy.

When I was 15, my father gave me a nightmarish choice: he would take me to the Twin Cities to see either Queen or the Clash, but not both.

I still love both bands, but my favorite album at the time was Queen's Greatest Hits, so I chose Queen. We went, it was awesome, I bought a T-shirt, and I bragged about it to my friends for years.

When Queen's Freddie Mercury died in 1991, I was sad that one of my favorite singers was no longer with us - but I was happy I'd chosen to see him in concert on what turned out to be his last North American tour. Whew.

By then, the Clash was no longer together, but I wasn't worried. I figured it would only be a matter of time until they reunited. But they didn't. Then lead singer Joe Strummer died.

Suddenly, I wasn't so sure I'd made the right decision.

Last weekend, in an attempt to make things right, I went to see Big Audio Dynamite in Chicago and Minneapolis - also known as the band that features the Clash's Mick Jones on lead vocals.

The band was great; it was mind-blowing to be in the presence in one of history's greatest songwriters, guitarists, vocalists - and one quarter of one of my favorite punk bands.

But deep down inside, I knew: had Joe Strummer lived, I'd probably be seeing the Clash reunion instead.